Showing posts from January, 2010
Show all

Competence and Honesty in Pak Leadership

"It has been my experience that folks who have no vices have very few virtues" is a quote often attributed to Abraham Lincoln, also known as Honest Abe. I do not entirely agree with Honest Abe, but what does it mean in Pakistan's context, given the extraordinary and often hypocritical incessant demands for honesty by the nation's TV talking heads? Is competence not as big or bigger virtue than honesty? Is it not Utopia to expect angels to rise to leadership positions in a nation that generally scores badly at all levels on corruption indexes ? Is it not better to elect and expect greater competence from the leaders in Pakistan? The kind of competence that delivers good governance for the greater good of society? Since the beginning of Pakistan's existence as an independent nation in 1947, there has been constant repetition of slogans about piety and honesty by invoking the name of Islam, and its early legendary leaders, particularly great Caliphs like Omar. Wha
1 comment
Read more

Cash poor and energy-starved Pakistan should consider tapping into the London-based global carbon trading market to fund its renewable energy projects . The carbon market is about $6 billion now, and it is projected to exceed 50 billion dollars after the US joins carbon trading. Here is how I understand it: Let's take the example of a hypothetical big European company XYZ faced with the problem of large carbon emissions that must be reduced or offset by one million ton under the Kyoto protocol. To satisfy the international treaty requirements, XYZ company has the option of either installing carbon-capture equipment to reduce its emissions by a million ton, or retrofit the plant to cut its carbon emissions or buy carbon offsets from a carbon trader for a project in a developing country like Pakistan that offsets its emissions by a million ton. It is a business decision that often leads companies such as XYZ to fund cost-effective carbon offsets in developing nations by buying car
3 comments
Read more 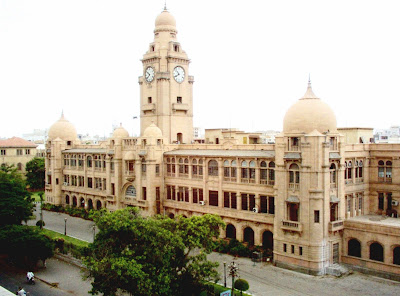 With rapid urbanization in Pakistan , Karachi has become the world's biggest city with a metro area population of 18 million people, according to Citymayors stats published recently. Karachi (Urdu: کراچی, Sindhi: ڪراچي, Karāchi) is followed by Mumbai, Delhi, Buenos Aires, Seoul, Jakarta, Manila, Sao Paulo, Shanghai and Istanbul making up the top 10 list. Bangladesh capital Dhaka is at number 12, barely missing a top 10 slot. Of these, Mumbai, Dhaka and Delhi also have the dubious distinction of making Mercer's list of world's dirtiest cities . In another survey, Mercer has ranked Karachi as the fourth cheapest city for expatriates . The list of the world’s largest cities, by land area, is headed by New York Metro, with a total area of 8,700 square kilometers. Tokyo/Yokohama is in second place with almost 7,000 square kilometers, followed by ten cities from the United States. Mumbai (Bombay), with a population density of almost 30,000 people per square kilometer, is the
5 comments
Read more

A pilot program in Pakistan has demonstrated the effectiveness of pushing mass literacy through the use of cell phone text messaging capability. The five-month experiment, initiated by United Nations Educational, Scientific and Cultural Organization (UNESCO), targeted 250 females aged 15 to 24 years old in three districts of Pakistan's Punjab province. In this pilot project which successfully concluded last month, the participant who have just completed the basic literacy course, were given a mobile phone each. They received three text messages a day in the local language. They were required to practice reading and writing the messages in their work book and reply to their teachers by text. The success of this mass literacy initiative augurs well in a country like Pakistan, where the mobile phone penetration is among the highest in the developing world, and the number of mobile subscribers has rocketed from less than 2 million to more than 94 million (58% penetration) from 20
13 comments
Read more

Defense Economics: Guns or Bread in India and Pakistan?

I have just published on my blog , Haq's Musings, a guest post by Colonel Pavan Nair, a retired Indian Army officer, a detailed analysis of the Indian defense spending in the context of the nation's growing needs for social spending on food, education and health care. Col Nair prefaces his analysis by lamenting that " defense economics has not been a subject for serious study or debate in Indian academic or military circles. Little or no literature is available with the exception of a few books in the area of defense accounts. Economists and activists have long argued that defense related expenditure needs to be curtailed. Opinion is clearly divided between the developmental lobby and strategic thinkers who wield influence with the political leadership." Nair then goes on to accept the challenge of defense economics in India by laying out his case with lots of data and sources, and concludes with the following: Besides external defense, internal security and human
6 comments
Read more 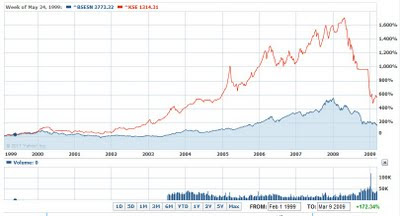 Karachi shares market significantly outperformed Mumbai in the last ten years. But this fact is not enough to get any positive attention from Fareed Zakaria, India's best-known cheerleader in the West. As expected, Fareed Zakaria's discussion of " The Rise of the Rest " sings praises of the BRIC nations, particularly mentioning his native India in the most glowing terms. There is nothing wrong with that, except that Zakaria omits any positive mention of India's neighbor Pakistan in the context of economic performance in the decade of 1999-2009 , and chooses to strike familiar themes of "Islamic jihadists" and "terrorism" when he does make any references to Pakistan. What Zakaria has omitted is the story of the extraordinary returns Pakistan has produced for investors. Pakistan's key share index KSE-100 was just over 1000 points at the end of 1999, and it closed at over 9727.40 on Dec 31, 2009. Pakistan rupee remained quite stable at 60
7 comments
Read more

Hagler Bailly, a global management consulting firm with an office in Islamabad, warned in a 2006 study that Pakistan is going to witness gas shortage starting in 2007, and the imbalance will grow every year to cripple the economy by 2025, when shortage will be 11,092 MMCFD (Million standard cubic feet per day) against total 13,259 MMCFD production. The Hagler Bailly report added that Pakistan's gas shortage would get much worse in the next two decades if it did not manage any alternative sources. It appears that we are seeing the beginning of the crisis that HB predicted back in 2006. Recent Growth in Gas Demand: Demand for natural gas in Pakistan increased by almost 10 percent annually from 2000-01 to 2007-08, reaching around 3,200m cubic feet per day (MMCFD) last year, against the total production of 3,774 MMCFD, according to Pakistani official sources . But, during 2008-2009, the demand for natural gas exceeded the available supply, with production of 4,528 MMCFD gas against
102 comments
Read more

Pakistan's KSE-100 stock index surged 55% in 2009, a year that also saw the South Asian nation wracked by increased violence and its state institutions described by various media talking heads as being on the verge of collapse . Even more surprising is the whopping 825% increase in KSE-100 from 1999 to 2009, which makes it a significantly better performer than the BRIC nations . BRIC darling China has actually underperformed its peers, rising only 150 percent compared with energy-rich Brazil (520 percent) and Russia (326 percent) or well-regulated India (274 percent), which some investors see as a safer and more diverse bet compared with the Chinese equity market, which is dominated by bank stocks. This is the kind of performance that has got the attention of some of the top investors and investment firms around the world. Not only has Goldman Sachs reaffirmed Pakistan's place on the list of its top 15 emerging economies for 2010, smart international investment gurus are inv
21 comments
Read more
More posts