Showing posts from February, 2015
Show all

Pakistan has started verifying identities of over  135 million cell phone users  through fingerprints. The massive exercise is being described by Washington Post as the "world’s largest — and fastest — efforts to collect biometric information". The deadline for completion is March 14, 2015. Several countries, including South Africa and  India , have recently implemented broad systems for collecting and storing their citizens biometric information. But analysts and communications experts say they can’t recall a country trying to gather biometrics as rapidly as Pakistan is doing, according to the  Washington-based American newspaper . In addition to setting up biometric verification systems at tens of thousands of retail points run by carriers, the cellphone companies have launched massive advertising campaigns and sent mobile vans around the country to accelerate the process. About half of all SIMs have so far been verified. The companies are warning subscribers that
15 comments
Read more 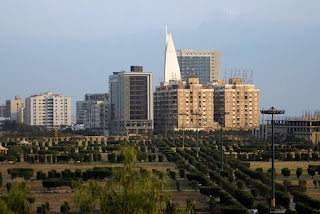 Is it true that "India is rising and Pakistan is rapidly collapsing", the currently accepted western narrative recently re-iterated by Roger Cohen in his New York Times Op Ed from Lahore, Pakistan? Let's examine it by reviewing reports filed by several Indian journalists after their recent visits to Pakistan: "India is a democracy and a great power rising.  Pakistan  is a Muslim homeland that lost half its territory in 1971, bounced back and forth between military and nominally democratic rule, never quite clear of annihilation angst despite its nuclear weapons". Roger Cohen's  New York Times Op Ed  "Pakistan in Its Labyrinth" "I.. saw much in this recent visit (to Pakistan) that did not conform to the main Western narrative for South Asia -- one in which India is steadily rising and Pakistan rapidly collapsing. Born of certain geopolitical needs and exigencies, this vision was always most useful to those who have built up India as an investme
37 comments
Read more

Domestic cement sales are up 9% year-over-year for the first 7 months of Pakistan's Fiscal 2014-15, according to  media reports .  Overall, cement industry reports cement shipment of over 20 million tons in 7 months, a  6% annual increase  with rising domestic demand offsetting falling exports due to weakness abroad. Market capitalization of  Pakistani cement companies has  jumped 70%  last year, about 3 times more than the KSE-100 market index which rose  27% in 2014 . This is the third consecutive year that cement companies have outperformed the broader market. Investors in Pakistan's cement sector have seen 600% rise in the last three years. It appears that construction  sector is getting a boost from falling inflation and declining interest rates with a big drop in world oil prices. Domestic sales of 2.5 million tons a month translate to about 160 Kg per capita consumption of cement, the highest level in Pakistan's history. Pakistan saw its domes
30 comments
Read more

Pakistan Ranks in the Middle For Logistics and Trade 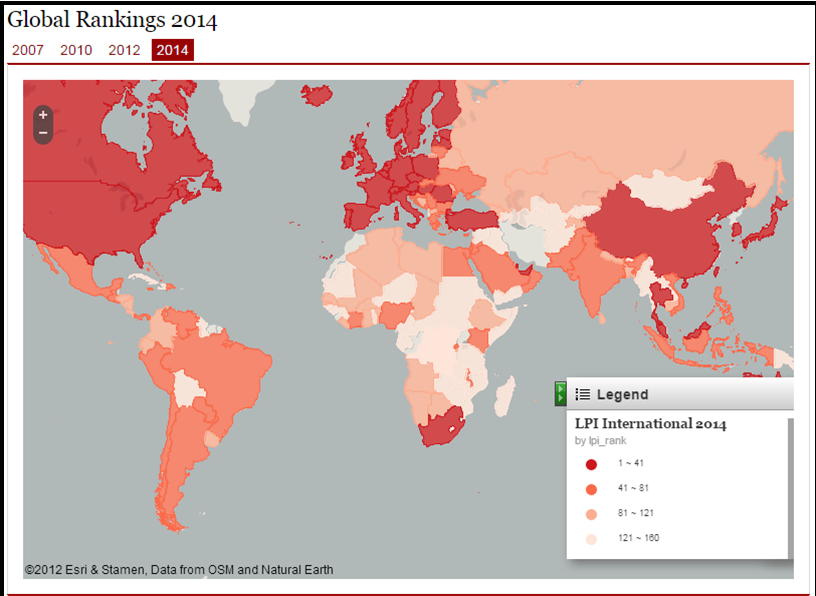 The World Bank’s (WB)  Logistics Performance Index (LPI)  ranks Pakistan at number 72 for 2014, out of 160 countries. LPI  is ranking is based the efficiency of customs, border management and clearance as well as the quality of trade and  transportation infrastructure . It also comprehends the quality of logistics services, the ability to track and trace consignments and the frequency at which shipments correctly reach their destinations on schedule. The first LPI survey conducted in 2007 ranked Pakistan at number 68, which fell to a low of 110 in 2010 before recovering to 71st position in 2012. Logistics performance is an important indicator of a nation's level of development and its ability to  participate in global trade . Another similarly important indicator is the ranking of a country on OECD survey of  economic complexity  compiled by Massachusetts Institute of Technology.  This indicator comprehends the diversity of products ad services traded and the number
16 comments
Read more

Indian government now claims that the country's GDP grew by 6.9% in 2013-14, well above the 4.7% growth the country had announced earlier. Based on the latest methodology,  it is claimed that the Indian economy expanded 7.5 percent year-on-year during the last quarter, higher than 7.3 percent growth recorded by China in the latest quarter, making it the fastest growing major economy in the world, according to  Reuters . Is it wishful thinking to make Indian economy look better than China's? India GDP Revisions. Source: Financial Times The GDP revisions have surprised most of the nation's economists and raised serious questions about the credibility of government figures released after rebasing the GDP calculations to year 2011-12 from 2004-5. So what is wrong with these figures? Let's try and answer the following questions: 1. How is it possible that the accelerated GDP growth in 2013-14 occurred while the Indian central bankers were significantly jacking up
6 comments
Read more
More posts