Showing posts from May, 2010
Show all

May 24, 2010
Freakonomics is a series of books by authors Steven D Levitt and Stephen J Dubner who find data points, patterns, correlations and trends that are often missed by mainstream economists and researchers. For example, the authors see how legalization of abortion may have caused significant crime rates decline in the United States in recent decades. They argue with various statistics to reject other possible explanations like gun control, strong economy, three-strikes laws etc. Authors say that the termination of unwanted pregnancies has led to fewer criminals on the streets of America. In their latest book of the Freakonomics series, Superfreakonomics , the authors cite the findings of two American economists Robert Jensen and Emily Oster that cable TV in 2700 households empowered Indian women to be more autonomous. Cable TV households had lower birthrates, less domestic abuse and kept more girls in school. Here are some highlights from the book about India : 1. If women could choose
30 comments
Read more 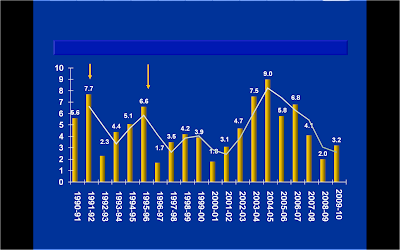 Guest Post by Dr. Ashfaque H. Khan, Dean of NUST Business School , Islamabad. Pakistan's economy has grown at an average annual rate of 5.0 per cent over the last 62 years despite numerous impediments to its growth. By any standard, this has been a major achievement in terms of raising real incomes and alleviating poverty. The economic growth, however, remained uneven and interrupted by a variety of factors for a prolonged period. It was during 2000-07 that Pakistan's economy experienced the longest spell of strongest growth due to sound economic policies, structural reforms and a benign international economic environment. Economic growth has slowed considerably in Pakistan over the last two to three years owing to a variety of domestic and external factors. What is worrisome is the new development where the growth number is being manipulated to paint a rosy picture. There was a story about the manipulation of growth number for 2009-10 in The News on May 16, 2010. The us
4 comments
Read more India is continuing to run large current account and trade deficits. India's trade deficit was an estimated $86.6 billion in April- January 2009-2010, according to media  reports . The  Reserve Bank of India  said the nation's current account deficit widened to $29.8 billion in fiscal 2009, compared with a deficit of $17 billion in prior year. The nation’s capital account continued to be negative for the second quarter in a row. The gauge of investment flows into and out of the country showed a shortfall of $4.44 billion in the three months to 31 March, compared with a net inflow of $26.5 billion a year earlier, RBI said. India's government has sent letters to the country's telecom companies ordering them not to buy equipment from Huawei, ZTE, and several other Chinese companies due to security risks, according to a report in  Businessweek . A few weeks ago, the  Wall Street Journal  reported that there was a similar move by Delhi to limit China's growing ro
11 comments
Read more

The simplest definition of the middle class is a group of people in a society who are neither rich nor poor. The middle class has always been considered vital to a country's stability and growth. The rich and the poor simply distrust each other too much to let the other govern. Nations with large middle class populations find it easier to sustain good, democratic governance. Unfortunately for Pakistan, the size of the middle class was very small when it came into existence, and the country was dominated by a small powerful feudal elite created by the British rulers to sustain their colonial rule. And the urban middle class remained small for decades. The situation has, however, finally begun to change in the the last decade of 1999-2009 with a combination of increasing urbanization and faster economic expansion that fueled significant job creation in the industrial and services sectors to enable middle class growth. Pakistan is now more urbanized with a larger middle class tha
28 comments
Read more
More posts