Showing posts from July, 2020
Show all

Intel has recently fired its Indian-American chief engineer Venkata Murthy Renduchintala, who also served as Group President of the Technology, Systems Architecture and Client Group (TSCG), for failure to deliver 7 nanometer semiconductor technology on schedule, according to Reuters .  The news has knocked the market value of Intel by tens of billions dollars. The American company, the biggest global chip manufacturer with in-house fabrication plants, has also decided to outsource manufacturing. This could deal a serious blow to America's global leadership in chip manufacturing which is fundamental to all other computer and communications related technologies. Intel's Global Leadership: Intel Corp. (INTC), founded in 1968 in Silicon Valley, is the world's largest and the most advanced semiconductor company, larger than the second-ranked Samsung Semiconductors, and more than triple the size of the next-largest domestic producer, Qualcomm Inc. (QCOM). What distingui
39 comments
Read more

Pakistani Prime Minister Imran Khan has recently announced a  new housing construction incentives  package that includes down payment assistance and expansion of home loans portfolios by commercial banks at discounted rates for affordable housing for the poor. Shariah compliant financing is also included in it. Pakistan’s mortgage finance to GDP ratio is just 0.25%, among the lowest in the world, according to the  World Bank . The average for South Asia 3.4%.  New housing drives a large number of sectors of the economy from  banking  and  building materials  to  construction  and  manufacturing  of furniture and  home appliances . These incentives are designed to stimulate the economy, boost employment and deal with the growing shortage of affordable housing in the country. Naya Pakistan Housing: Pakistan government's Naya Pakistan housing program offers Rs. 33 billion in direct subsidies for down payments for the first 100,000 applicants, according to  media reports . In a
16 comments
Read more 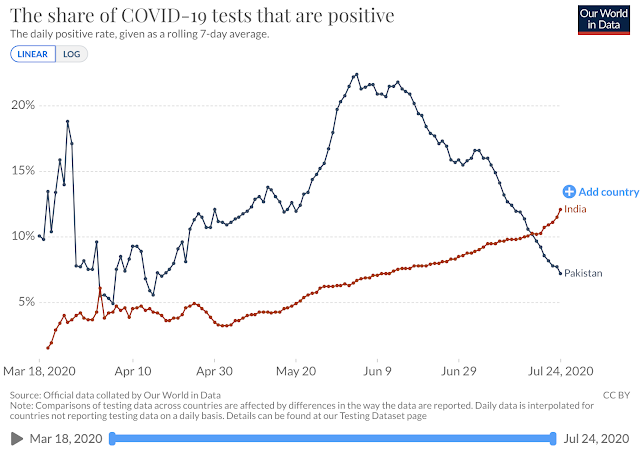 Pakistan COVID19 Antibodies Study: 90% of Virus Carriers Have No Symptoms

Guest Post by Dr. Wajiha Javed Head of Public Health and Research Getz Pharma, Pakistan. Key Findings:  • Survey revealed that 90% of the population who tested COVID-19 positive (screened via serologic test kits) were asymptomatic carriers of the disease, who would have otherwise not presented at a government-approved PCR testing facility.  • If the results of this study are extrapolated to the rest of the population with similar demographics, the total number of active COVID-19 infections in the country would go up to 4.11 million, which is 17.7 times higher than the current official number.  • While these findings are restricted to Pakistan’s urban, adult, working population in various metropolises, they still provide useful insights for guiding public health practices across the country.  • This is a groundbreaking research which can improve Pakistan’s public health response to COVID-19 by increasing testing capacity and ensuri
8 comments
Read more
More posts