Showing posts from May, 2020
Show all

Are Lockdowns Absolutely Necessary to Contain the Coronavirus Pandemic? 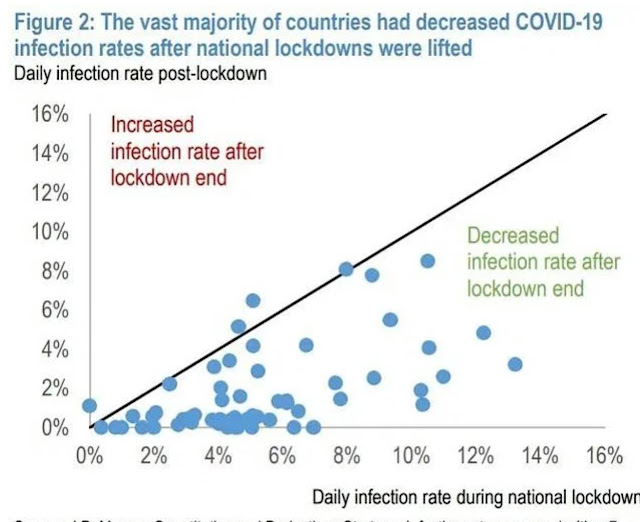 Many countries have imposed strict lockdowns to control the spread of coronavirus.  Marko Kolanovic of JP Morgan claims that numbers had declined because the virus "likely has its own dynamics" that are "unrelated to and often inconsistent lockdown measures".  He cites as evidence a number of places whose infection rates, or "R" values, have continued to fall despite restrictions being lifted. Coronavirus Transmission Rates Before & After Lockdown. Source: JP Morgan Are these absolutely necessary? What are its costs and benefits in terms of  lives and livelihoods , particularly in developing countries like Pakistan with young populations?  Over 40% of all coronavirus deaths in Europe and America have occurred among the elderly living in nursing homes. Pakistanis age 60+ account for 19% of cases but 58% of deaths. Like US and Europe, older people are much more likely to die from coronavirus in Pakistan.  But average life expectancy in Pakistan i
22 comments
Read more

Yom-e-Takbeer: US Efforts to Stop Pakistan Nuclear Tests in May, 1998 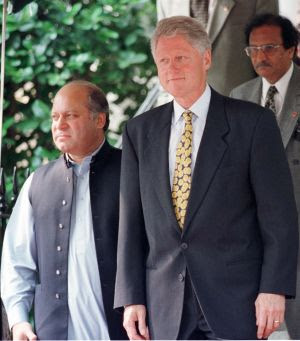 "Believe me when I tell you that my heart is with you. I appreciate and would even privately agree with what you're advising us to do (abandon nuclear tests)", said Pakistan's Ex Prime Minister Nawaz Sharif to US  Deputy Secretary of State Strobe Talbott on May 16, 1998 The order to conduct  Pakistan's nuclear tests  came from Mr. Nawaz Sharif who was Pakistan's prime minister in 1998. It came on May 28, just over two weeks after India's nuclear tests conducted May 11 to May 13, 1998. Pakistan went ahead with the tests in spite of the US pressure to abstain from testing.  US President Bill Clinton called Prime Minister Nawaz Sharif immediately after the Indian tests to urge restraint.  It was followed up by Deputy Secretary of State Strobe Talbott's visit to Islamabad on May 16, 1998. In his 2010 book titled " Engaging India: Diplomacy, Democracy, and the Bomb ", Secretary Talbott has described US diplomatic efforts to dissuade Pakista
8 comments
Read more

Pakistan's computer services exports soared 26% in March, 2020 over the same month last year. This growth occurred in spite of the coronavirus lockdown that began on March 23, 2020. The nation's total services exports fell 17% in the same month. Pakistan ICT Exports. Source: PBS The ICT services exports bucked the overall down trend in Pakistan's exports. The country exported computer service worth $102.26 million in March, 2020, up 25.77% from $81.31 million in March, 2019.  Overall telecommunications, computer and information services increased 19.44% to $134.95 million in March 2020, up from $112.99 million in March 2019.  Prior to the current coronavirus lockdown, PBS reported that Pakistan's technology exports increased 26.24% in the first 8 months  (July-February) of the current financial year. Double Digit CAGR in Pakistan IT-ITeS Exports in 2010-2018 The data released by the PBS showed that Pakistan earned a total amount of $887.47 million during t
37 comments
Read more

President Donald Trump has picked renowned Moroccan-born  Muslim American  immunologist Dr. Moncef Mohamed Slaoui to  lead  Operation Warp Speed, America's COVID-19 vaccine program. Trump has compared this vaccine effort with the Manhattan Project that developed the atomic bomb in the 1940s. Dr. Moncef Slaoui Dr. Slaoui is a highly recognized scientist and a successful leader who has delivered as GSK's head of vaccines. He appears to have more of a can-do entrepreneurial approach to solving problems. He has recently been running a life-sciences VC fund in Philadelphia. Announcing the appointment, Trump described Slaoui as “one of the most respected men in the world in the production and, really, on the formulation of vaccines.” “Operation Warp Speed’s chief scientist will be Dr Moncef Slaoui, a world-renowned immunologist who helped create 14 new vaccines,” Trump said at a White House news briefing. “That’s a lot of our new vaccines — in 10 years, during his time in the
4 comments
Read more 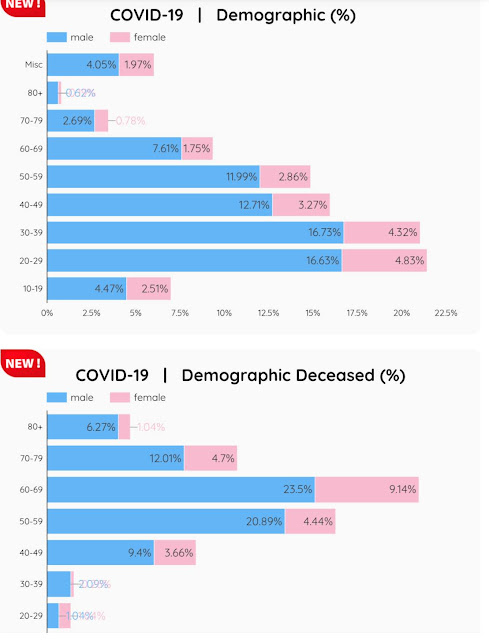 Coronavirus infection rates and deaths in Pakistan are among the lowest in the world while the continuing lockdown is causing enormous damage to the nation's economy and livelihoods, according to government data. Health ministry data shows that fewer than a thousand lives have been lost to the disease in the country since the start of  COVID19 infections  more than two months ago. Meanwhile, millions of people in  manufacturing , retail and the unorganized sectors are unemployed or underemployed. All of this is happening during  Ramzan and Eid periods  that account for bulk of retail sales in the majority Muslim country of 220 million. Pakistanis do not necessarily face the same level of risk from coronavirus as people living in America and Europe do. Age Distribution of Covid Cases/Deaths in Pakistan. Source: covid.gov.pk Age Factor in Covid19 Mortality: Over 40% of all coronavirus deaths in Europe and America have occurred among the elderly living in nursing homes. Pa
22 comments
Read more

Renewable Energy in Pakistan: 15.2% of Households Use Solar 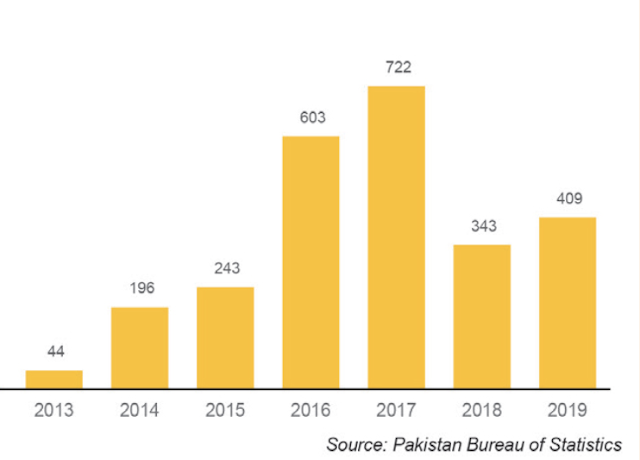 Solar panel installations in Pakistani homes are rising rapidly. Pakistan PSLM/HIES 2018-19 survey results reveal that 15.2% of all households are using solar panels as a source of energy for their homes.  Khyber-Pakhtunkhwa province leads the nation with 40% of all households using solar energy. Rural Pakistan is embracing solar power at a faster rate than Urban Pakistan. Adoption of solar in rural areas of KP is at 43%, Sindh 33.9%,  Balochistan 20.4% and Punjab 7.9%. Rapid decline in cost of solar panels appears to be driving the adoption of solar in Pakistan's rural areas where grid power is either unavailable or unreliable. Pakistan is starting to join the clean energy revolution with increasing adoption of solar and recent announcement of National Electric Vehicle Policy. Covid19 pandemic may temporarily slow it down but the upward trend will likely continue. Pakistan Solar Panel Imports in Millions of US Dollars. Source: FBS Via Pakistan Today Solar Panels in Pak
41 comments
Read more 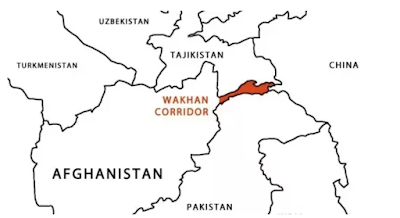 Uzbekistan is the third landlocked state in recent years to request the use of Pakistani ports for trade, according to media reports.  The Central Asian nation has asked to join Quadrilateral Traffic in Transit Agreement (QTTA) to make use of Karachi and Gwadar ports for its trade operations. Current members of QTTA are China, Pakistan, Kyrgyzstan and Kazakhstan. Afghanistan is not a member of QTTA but it currently uses Gwadar and Karachi ports under Afghanistan-Pakistan Transit Trade Agreement (APTTA). Pakistan is making a serious effort to stabilize Afghanistan, a member of CAREC. The recent US-Taliban peace deal is the result of Pakistan's efforts to bring the warring sides to the negotiating table. Afghan instability has prevented Pakistan from connecting with other STANs for commerce and trade. Now the development of CPEC will enable Pakistan to bypass Afghanistan, if necessary, to connect with Central Asia region through Western China. Pakistan to Bypass Afghan Wakhan Cor
33 comments
Read more

An overwhelming 81% majority of Pakistanis are satisfied with Federal Government performance in responding to coronavirus pandemic, way up from 61% who expressed satisfaction in March, according to a recent Gallup Pakistan survey. These numbers reflect Pakistan's much flatter disease curve compared with most other  nations, including highly developed  ones, that have seen a rapid rise in Covid-19 cases and deaths. The federal government has also launched an $8 billion stimulus program to deal with the economic impact of COVID19 on small businesses and the poor daily wage earners. Meanwhile,  the nation's central bank has significantly cut interest rates from double digits down to single digit. Bilal Gilani of  Gallup Pakistan tweeted  his reaction to the poll result in the following words: "These are very unusual numbers ! But not without parallels from around the world. Crisis brings good in govt and ppls expectations set changes!" The unprecedented crisis has i
34 comments
Read more
More posts