Showing posts from August, 2018
Show all

State Bank: Pakistan IT Exports Surge Past Billion Dollars in 2018 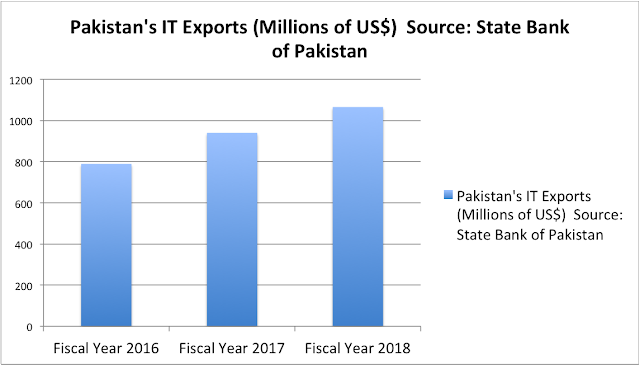 Pakistan's newly-elected Prime Minister Imran Khan has completed his first week in office. He has named his cabinet and key advisors to run his government. What key challenges does he face going forward? Pakistan graduated from low-income (level 1) to lower-middle-income (level 2) status at the end of  Musharraf years  in 2008, according to the United Nations.  Can  Prime Minister Imran Khan  lead his nation to  upper-middle-income (level 3) ranks  by the end of his first term in office? What are his chances of accomplishing this ambitious goal? Successive Pakistani governments have failed to  manage the nation's external accounts  and foreign exchange reserves, forcing incoming governments to seek IMF bailouts. IMF bailouts come with strings attached, strings that impact Pakistan's sovereignty. One of the key reasons is that Pakistan's exports have halved from about 16% of GDP in 2003 to 8% of GDP in 2017. India's exports have increased from 15% to 19% of G
1 comment
Read more 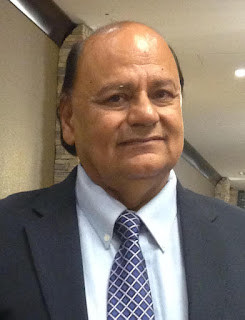 The scribe was interviewed live on Facebook for Day Dreamers Show by its host Dr. Aijaz Qureshi Canadawalla on August 24, 2018. The discussion began with introductions. It focused on the following topics: Riaz Haq 1.  Riaz  Haq's  background, education and 37 years experience in Silicon Valley: Graduated with a bachelor's degree in electrical engineering from Karachi's NED University in 1974. Completed Master's degree in EE from New Jersey Institute of Technology in 1981. Worked at Intel Corporation for 15 years and led microprocessor design teams. Recognized by PC Magazine as Person of the Year for contribution to Intel 80386 processor. Started two high tech companies. 2.  Silicon Valley Pakistanis: Over 50,000  Pakistanis in Silicon Valley . Many successful tech entrepreneurs. Some have taken companies public while others have sold companies to big tech giants like Cisco and Intel. Organization of Pakistani Entrepreneurs in active in Silicon Valley and holds a
Post a Comment
Read more

Can Imran Khan Lead Pakistan to the Next Level? 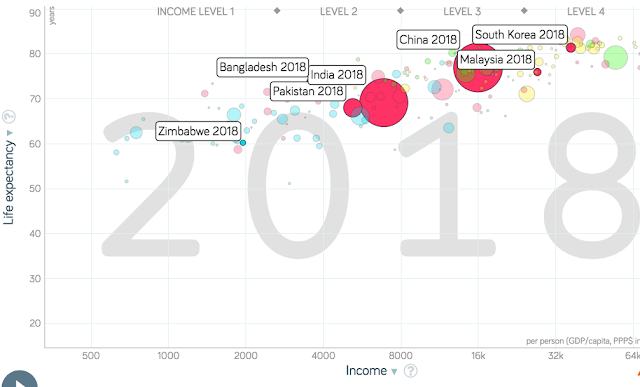 Pakistan graduated from low-income (level 1) to lower-middle-income (level 2) status at the end of  Musharraf years  in 2008, according to the United Nations.  Can  Prime Minister Imran Khan  lead his nation to upper-middle-income (level 3) ranks by the end of his first term in office? What are his chances of accomplishing this ambitious goal? Health-Wealth Levels. Source: Gapminder.org Four Levels of Development: The extensive data compilation and research by Professor Hans Rosling of Sweden has shown that the binary categorization of nations into developed and developing is no longer useful. Instead, he has proposed using  4 levels of development  based on health and wealth indicators, a proposal that has now been accepted by the United Nations and the World Bank. Here's how Rosling and the United Nations define these 4 levels: 1. Level 1: One billion people live on level 1. This is what we think of as extreme poverty. If you’re on level 1, you survive on less than $2
13 comments
Read more

Pakistan Tehreek e Insaaf (PTI) Chief Imran Khan became Pakistan's 22nd prime minister after his 22-year-long quest for the highest executive office in the land. What is the historic significance of this event for Pakistan's democracy? Has it finally ended the three-decade-long  dynastic duopoly  of the Pakistan Muslim League and the Pakistan People's Party which are controlled by Sharifs and Bhuttos? Will the emergence of the PTI as the 3rd political force likely reduce corruption and improve governance in Pakistan? Is Imran Khan's nomination of Sardar Usman Buzdar as Punjab Chief Minister a mistake? Will Prime Minister Imran Khan make mistakes as he begins his tenure? Will his opponents jump at every opportunity to attack him when he makes mistakes? Should he be allowed to make mistakes as he learns on the job? Is he entitled to a honeymoon period?  Do the Pakistani military and intelligence agencies call all the shots in Pakistan? Is the  military's role  i
2 comments
Read more 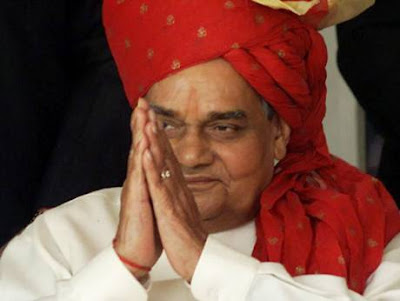 Former Indian Prime Minister Atal Bihari Vajpayee passed away today in New Delhi, India, according to  media reports . He was 93. He was seen as the moderate face of Hindu Nationalism. Mr. Vajpayee led  Hindu Nationalists  to their first-ever outright election victory with the majority of seats won by his BJP-led NDA (National Democratic Alliance) in the Indian parliament in 1999. He had briefly held the prime minister's job twice earlier but the third time proved to be the charm. His third term in office lasted from 1999 until 2004. Hardcore Hindu Nationalist: Vajpayee represented kind and gentle face of the RSS (Rashtriya Swayamsevak Sangh). Beneath the surface, however, he was a hardcore Hindu Nationalist.  He joined the RSS at the age of 16.  The RSS has sought to make India a  Hindu Rashtra (nation)  since its founding in 1925, a year after Vajpayee was born. Vajpayee stoked hatred against India's large Muslim minority. In a speeches to Hindu audiences he said: &qu
12 comments
Read more 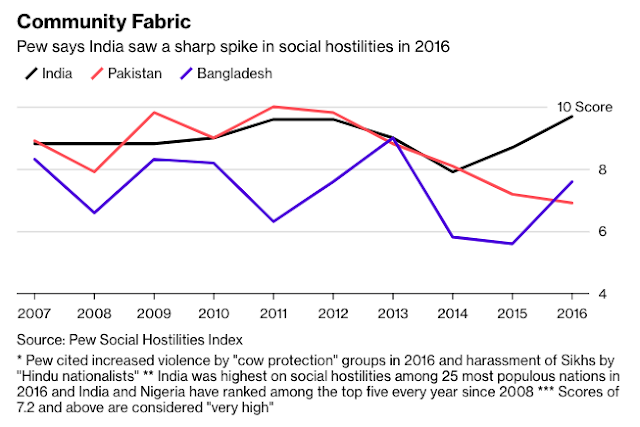 The rise of Hindutva forces is tearing India apart along caste and religious lines as the country celebrates 71 years of independence from the British colonial rule.  Hindu mobs are l ynching Muslims  and  Dalits . A recent   Pew Research report  confirms that the level of hostility against religious minorities in India is "very high", giving India a score of 9.5 on a scale from 0 to 10. Pakistan's score on this scale is 7 while Bangladesh's is 7.5. Chart Courtesy of Bloomberg Will India Break Up?  In recently published "The Raisina Model",  British-Indian author Lord Meghnad Desai asks: "A country of many nations,  will India break up ?" The Hindu Nationalists who are blamed for deepening divisions are themselves divided on the key questions of caste, religion and trade.  Professor Walter Anderson, co-author of "The RSS: The View to the Inside" raises the specter of "a battle between Hindutva and Hinduism". The Raisina Model: I
32 comments
Read more

Pakistan's Independence Day celebrations this year coincide with a momentous change in leadership.  It has been brought about by the  triumph of the insurgent Pakistan Tehreek e Insaf (PTI)  over Pakistan Muslim League Nawaz (PMLN) and Pakistan Peoples Party (PPP), both regarded as dynastic political parties.  PMLN and PPP are each controlled by a family.  Pakistan's Prime Minister Elect Imran Khan is part of a generation that he says "grew up at a time when  colonial hang up  was at its peak."  How will the acknowledgement of this upbringing affect Imran Khan's leadership of " Naya Pakistan "? Let's examine the answers to this question. Colonial Era Education:  Imran Khan attended Aitchison College, an elite school established in Lahore by South Asia's colonial rulers to produce faithful civil servants during the British Raj. He then went on to graduate from Oxford University in England. Here's an excerpt of what he wrote in an article
18 comments
Read more
More posts