Showing posts from March, 2015
Show all

Pakistan's per capita median income is $73.26 per month in terms of 2005 PPP (purchasing poverty parity) US dollars as of 2010. It is higher than  India 's $60.48 and  Bangladesh 's $51.67 per capita per month, according to the  World Bank . Source: World Bank Median income is the amount that divides the income distribution into two equal groups, half having income above that amount, and half having income below that amount. Mean income (average) is the amount obtained by dividing the total aggregate income of a country by the number of people in that country.  A country's median income is a better indicator than the average income to gauge how a population is faring economically. Median income also helps assess the size of the middle class in India, Pakistan and Bangladesh based on the definition used by Asian Development Bank and World Bank. Both of these institutions define middle class as those earning $2 or more per capita per day in terms of 2005 PPP US$
7 comments
Read more 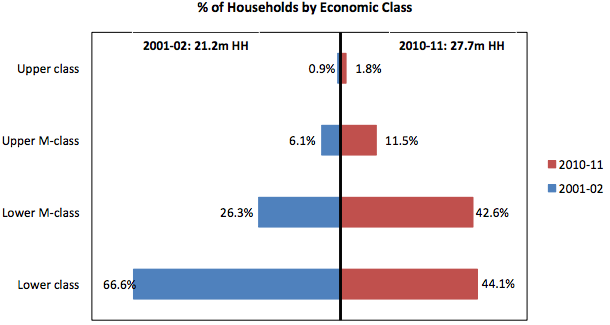 Majority of the households in Pakistan now belong to the middle class, a first in Pakistan's history, according to research by Dr. Jawaid Abdul Ghani of Karachi School of Business and Leadership ( KSBL ). It's an important tipping point that puts Pakistan among the top 5 countries with fastest growing middle class population in Asia-Pacific region, according to an Asian Development Bank report titled  Asia's Emerging Middle Class: Past, Present, And Future.  The ADB report put Pakistan's middle class growth from 1990 to 2008 at 36.5%, much faster than India's 12.5% growth in the same period. Source: Dr. Abdul Ghani From 2002 to 2011, the country's middle class, defined as households with daily per capita expenditures of $2-$10 in 2005 purchasing power parity dollars, grew from 32% to 55% of the population, according to a  paper presented by Dr. Abdul Ghani  at Karachi's Institute Business Administration's International Conference on Marketin
49 comments
Read more 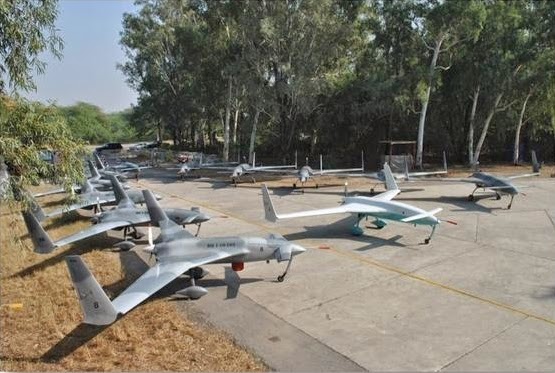 Pakistan has successfully flight-tested Burraq, its first armed drone . The new unmanned combat aerial vehicle (UCAV) fired and precisely hit both still and moving targets with Barq, a laser-guided missile it carried under its wings. Pakistan UCAV Burraq Source: ISPR Based on Chinese CH-3 specification,the indigenously developed Burraq can carry 100-kilogram payload.  It is a medium altitude long endurance (MALE) drone which can stay up for 12 hours. The payload can be laser-guided missile Barq, similar to Chinese  AR-1 missiles, or a pair of precision guided small-diameter bombs like the Chinese FT series PGM. With its successful Burraq test, Pakistan joins eight other countries — the United States, South Africa, France, Nigeria, Britain, Iran, Israel and China — which have already put weapons onto unmanned aircraft, according to the New America Foundation . Of these, only the US, Britain and Israel have successfully deployed armed drones during military operations, the found
11 comments
Read more 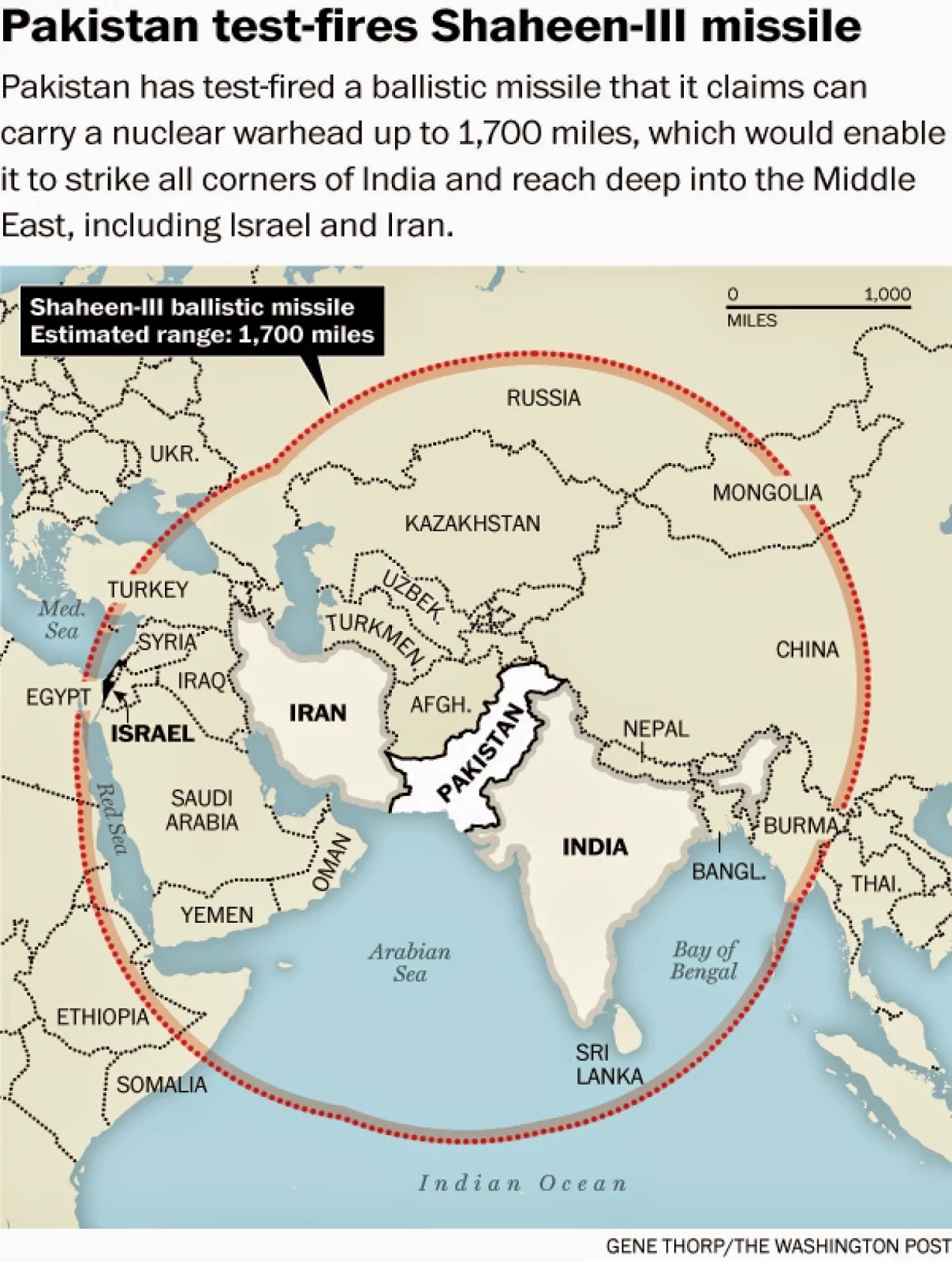 Pakistan has successfully tested Shaheen III ballistic missile with 1700 mile range. The intermediate range missile can hit deep inside India and Israel. Its multi-stage solid-fuel technology can also be used to launch satellites into space. It has been jointly developed by the National Engineering and Scientific Commission (NESCOM) and the Space and Upper Atmosphere Research Commission (SUPARCO). It's the latest example of dual-use technology. Pakistan Shaheen 3 Missile Range Source: Washington Post The missile was successfully test-fired into the Arabian Sea on Monday, March 9, 2015, according to the Strategic Plans Division (SPD) which oversees Pakistan’s nuclear program. Announcing the result, General Zubair Mahmood Hayat, the head of SPD, congratulated NESCOM (National Engineering and Scientific Commission) scientists and engineers for “achieving yet another milestone of historic significance.” Shaheen-III is the latest in the series of the indigenously produced Shah
52 comments
Read more
More posts