Pakistanis Remain Hopeful Amid Crises: 69% Think Their Children Will Do Better 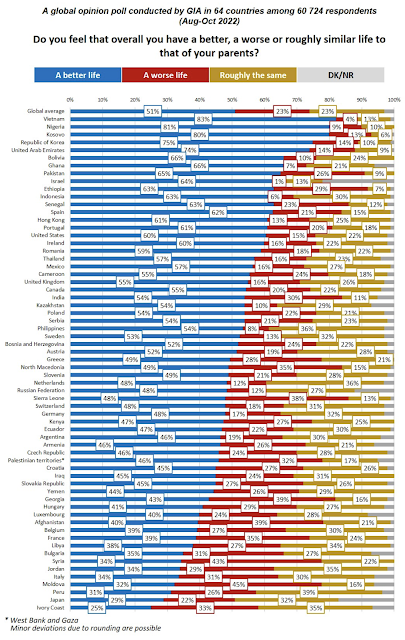 Pakistan is in the middle of multiple serious crises. But the vast majority of Pakistanis feel that they have better lives than their parents did, and they think their children will have even better lives than theirs, according to a Gallup International Poll of 64 countries conducted from August to October last year. The poll asked two questions: 1) Do you feel your life is better, worse or roughly similar to that  of your parents? and 2) Do you think your children will have a better, worse or roughly the same life as you? The answers to these questions reveal that Pakistanis are among the top 5 most positive nations among 64 countries polled by Gallup International. Anecdotal evidence in terms of packed  shopping malls and restaurants  in Pakistan's major cities confirms it. Such positivity augurs well for Pakistan's prospects of successfully dealing with the current crises. It will drive the nation's recovery.  Doing Better Than Parents. Source: Gallup International Pakis
3 comments
Read more 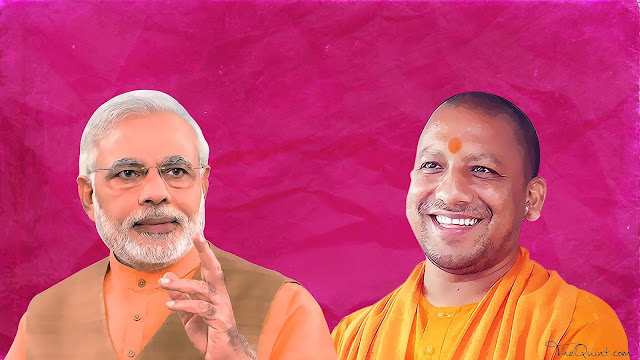 Yogi Adityanath, the radical Hindu Chief Minister of the Indian state of Uttar Pradesh, canceled his plans to lead a delegation to the 2023 World Economic Forum at Davos, Switzerland. The cancellation came after a criminal complaint was filed against the Hindu Nationalist leader who is widely seen as Prime Minister Modi's successor.  Indian Prime Minister Narendra Modi (L), UP Chief Minister Yogi Adityanath (R) Adityanath was planning to lead a delegation to the World Economic Forum-2023 meeting at Davos, Switzerland, according to reports in the  Indian news media . The state government put up a pavilion to showcase Uttar Pradesh as “the best investment destination”. The complaint was filed under the principle of “universal jurisdiction” by law firm  Guernica 37 . It alleges that Adityanath ( real name Ajay Singh Bisht) “ordered the false imprisonment, torture and murder of civilians between December 2019 and 2020” and that “these acts may amount to crimes against humanity.”    Gue
9 comments
Read more

Stranger at the Gate: The Story of a Muslim Convert Gets Oscar Nomination 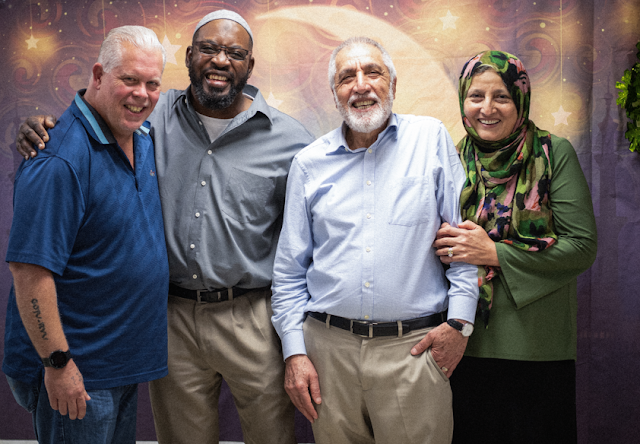 Retired US Marine Richard Mac McKinney hated Muslims so much that he planned to bomb an Islamic Center in the state of Indiana. His transformation is the subject of a documentary short film called "Stranger at the Gate." The film has already won a special jury prize at the 2022 Tribeca Film Festival. It tells the story of how McKinney abandoned his plot and ended up converting to Islam.   L to R: Mac McKinney, Jomo Willians, Dr. Mohammad Bahrami, Mrs. Bibi Bahrami When Mac, a veteran of the US "global war on terror",  returned to Indiana in 2006, he was outraged by the presence of the local Muslim community who he saw as enemies.  During the periods he described to Joshua Seftel, the director of "Stranger at the Gate", as “between being drunk and sober,” he brainstormed how he could attack Muslims —an action he thought of as continuing to protect his family and serve his country. He hatched a plot to bomb the Islamic Center of Muncie, Indiana on a Friday
1 comment
Read more

Pakistan Is Not Collapsing! 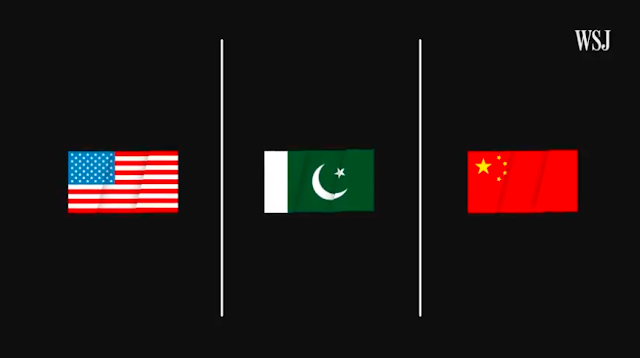 Pakistan is currently facing major economic and political crises. These are partly of its own making but mostly the result of external shocks in terms of commodity prices that have exacerbated the nation's balance of payments.  The Pakistani military's unnecessary meddling in politics and resulting political instability have not helped either. The unprecedented  floods  in the country have further added to the severity of the challenges.   US and China Compete For Influence in Pakistan. Source: Wall Street Journal Pakistan's multidimensional crisis has spurred many in  India  and elsewhere to predict the Pakistani state's imminent collapse. Some  disgruntled Pakistanis  have also jumped on the doomsayers' bandwagon. What is often ignored in such oft-repeated dire predictions is Pakistan's size and its geopolitical importance in the world. Indian analyst Amit Bhandari has summarized it well in a recent  Hindustan Times  Op-ed: "Despite the severity of the ch
12 comments
Read more

Is Shahzad Chaudhry Right "On India"? 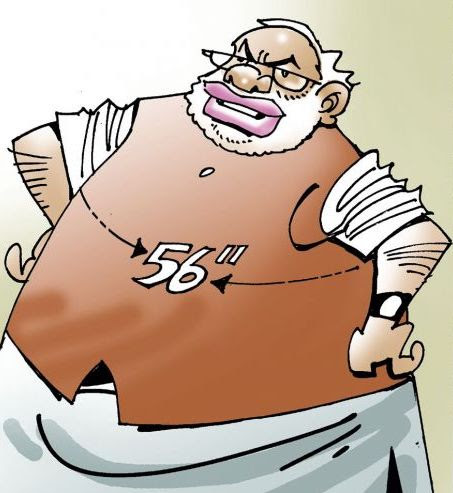 The Pakistan Air Force's Retired Air Vice Marshal Shahzad Chaudhry has recently penned an op-ed for The Express Tribune newspaper calling on his country to make peace with India. He argues that " India is relevant to the world", implying that Pakistan is not. Chaudhry believes that the "gap between Pakistan and India is now unbridgeable".  Chaudhry concludes his piece with the following recommendation: "It is time to recalibrate our policy towards India and be bold enough to create a tri-nation consensus, along with China, focusing on Asia to be the spur for wider economic growth and benefit". Prime Minister Indian PM Modi Boasts of Having "56 inch Chest" History of India-Pakistan Peace Talks: While I completely support Chaudhry's call for Pakistan to make peace with India, I do wonder why India's Hindu Supremacist Prime Minister Narendra Modi would even seriously entertain such a thought if "India is relevant to the world&qu
33 comments
Read more 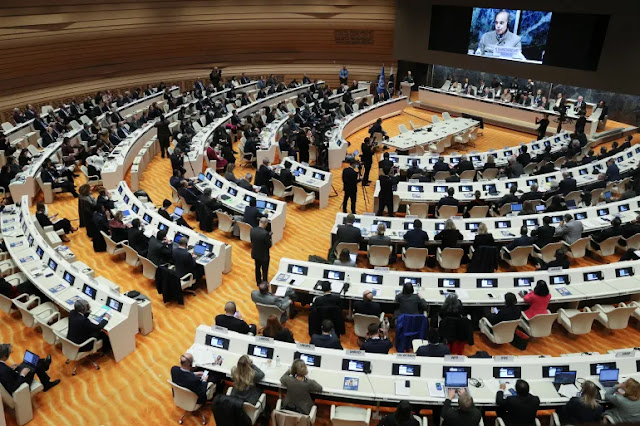 Pakistan has received pledges of $10 billion worth of loans and grants to rebuild after devastating floods last year, according to  Bloomberg  News. The amount pledged exceeds the $8 billion that Pakistan sought at the United Nations Donors Conference that concluded today in Geneva, Switzerland. The massive floods affected 33 million people living on vast swathes of land in rural Sindh and Balochistan. The flood waters killed an estimated 1700 people and  millions of animals. The floods also washed away millions of acres of standing crops, tens of thousands of homes and thousands of kilometers of roads. The total flood damage is estimated at  $33 billion  in economic losses, and cost of rebuilding is estimated at $16.5 billion. Prime Minister Shahbaz Sharif and U.N. Secretary-General António Guterres attended in-person, while world leaders such as French President Emmanuel Macron and Turkish President Recep Tayyip Erdoğan took part virtually.  UN Donors Conference For Pakistan Flood Ai
14 comments
Read more 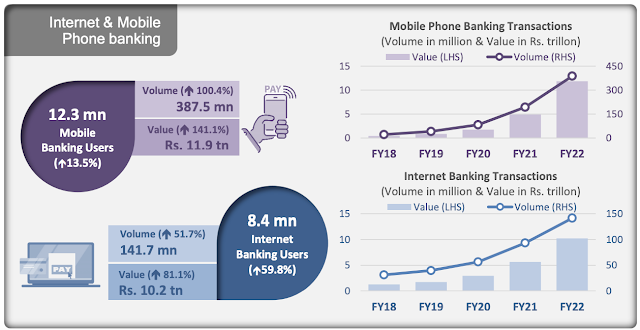