Showing posts from April, 2022
Show all

Ukraine War: Time For India To Rethink its Military Doctrine Modeled On Russia's? 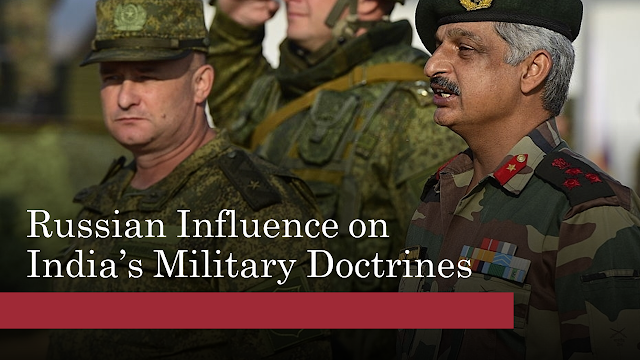 India's Russian-equipped and trained military is watching with great concern Russia's losses in the Ukraine war. Moscow has lost 20,000 soldiers, nearly 500 main battle tanks and a large warship so far, according to  media reports . Ukraine's use of Turkish drones, US-made anti-tank guided missiles (ATGMs) Javelins and Ukrainian anti-ship Neptune missiles has taken a heavy toll on the Russian Army and Navy. It is notable that India's Cold Start Doctrine against Pakistan is modeled on the Russian formation known as the “operational maneuver group” (OMG).    Russian Influence On Indian Military Doctrine. Source: Air University, US Air Force Russian Influence on Indian Military Doctrine: It is well known that the Indian Army relies on Russian tanks, artillery, rockets, and ammunition. The Indian Navy uses Russian ships, submarines and missiles and the Russian Su-30 MKI forms the backbone of the Indian Air Force. Like Russia, the Indian military doctrine is based on deployi
57 comments
Read more 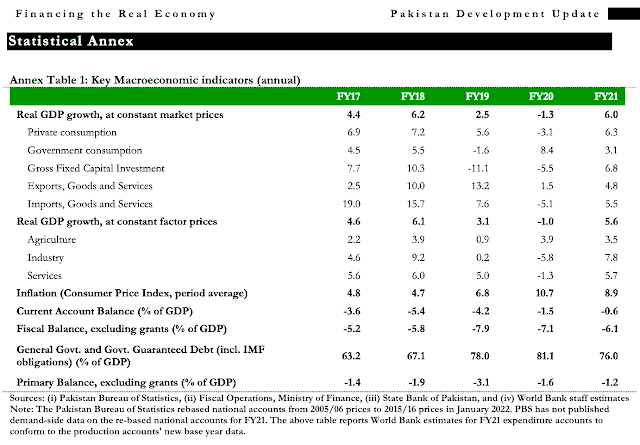 Pakistan poverty headcount, as measured at the lower-middle-income class line of US$3.20 PPP 2011 per day, declined from 37% in FY2020 to 34% in FY2021 in spite of the  COVID19 pandemic , according to the World Bank's Pakistan Development Update 2022 released this month. The report said Pakistan's real GDP shrank by 1% in FY20, followed by 5.6% growth in FY21.  The report highlights high inflation and low savings rate as key economic issues.  Pakistan's Macroeconomic Indicators. Source: World Bank The report credited the PTI government led by former  Prime Minister Imran Khan  for timely policy measures, particularly the  Ehsaas program , for mitigating the adverse socioeconomic impacts of the COVID-19 pandemic. Here's an excerpt of the report titled  Pakistan Development Update 2022 :  "The State Bank of Pakistan (SBP) lowered the policy rate and announced supportive measures for the financial sector to help businesses and the Government expanded the national cash
37 comments
Read more 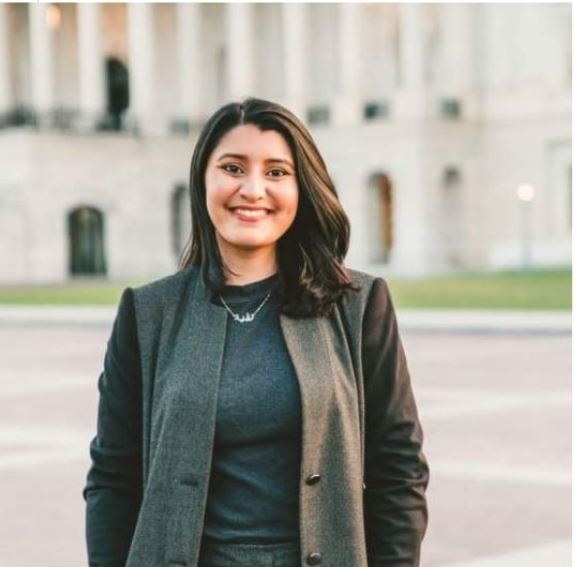 Rabia Bano Osman, a baby girl abandoned by her parents 28 years ago in Karachi, has paid glowing tributes to Bilquis Edhi who died recently in Karachi, Pakistan. Rabia was found by Bilquis Edhi in one of several cradles (jhoolas) placed outside Edhi Foundation's office for parents to anonymously leave babies,  mostly girls , they did not want or could not raise. She is now a well-educated and successful  career woman  working as a lawyer for Nike, the American athletic apparel giant with offices in San Diego,  California . In a post on LinkedIn, Rabia who goes by Rabi B.O. writes: "Because of you, a little Pakistani girl orphaned at birth dared to dream. Because of you I am an independent woman with a graduate level education and a place in the world to call my own. You gave me opportunity. You awarded me a chance to dream, and you presented me with freedom".  Rabia has a Master's degree in Cybersecurity and Data Privacy Law from New York's Albany Law School.  Rab
3 comments
Read more 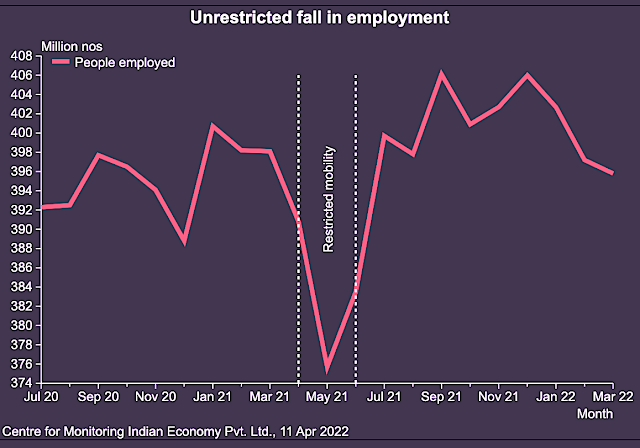 Akhil Bharatiya Pratinidhi Sabha (ABPS), the top decision-making body of India's RSS (Rashtriya Swayamsevak Sangh), says that “the young generation is suffering from unemployment and the pandemic has made things even grim... We cannot turn a blind eye to unemployment. It is a crisis and it needs to be addressed.” The RSS was apparently reacting to the falling labor participation rate in India relative to Pakistan and the global averages. The RSS leadership wants the government of Prime Minister Narendra Modi to focus on helping small and medium sized enterprises (SMEs) to create jobs.  RSS likes Modi government's ‘Make in India’ initiative “but it needs to be sharpened even more and get more investment.” The resolution is titled, ‘The need to promote work opportunities to make Bharat self-reliant’. The solution offered by  ABPS resolution : Take agro-based local initiatives to promote rural areas and create jobs, according to Ram Madhav, a member of the RSS executive committee.
47 comments
Read more 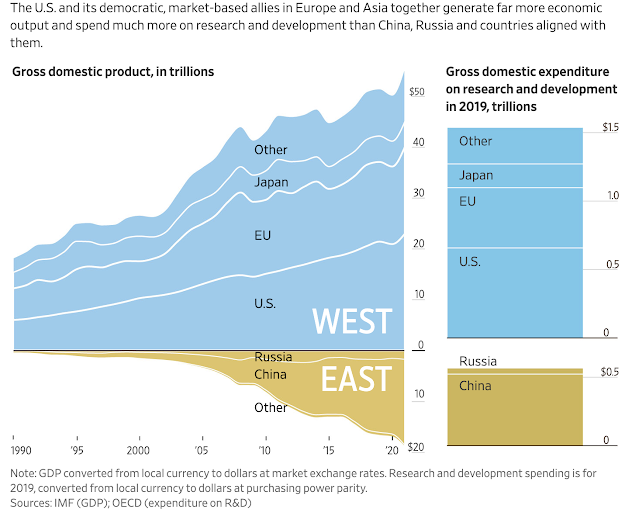 The US and its allies enjoy a significant technological advantage over China and Russia.  The Chinese are working hard to catch up but the West is not standing still. It is making huge investments in research and development to maintain this edge as it becomes increasingly clear that the outcome of the ongoing international geopolitical competition will largely be determined by technology.  East-West Comparison of GDP, R&D. Source: IMF (GDP), OECD (R&D) via WSJ In 2019, the United States and its allies invested $1.5 trillion in research and development, far outpacing the combined Chinese and Russian R&D investment of half a trillion USD.  This gap will likely narrow if the East's GDP continues to grow faster than the West's, allowing for higher investment in technology.  After the Russian invasion of Ukraine, the US, EU, Japan, South Korea and Taiwan have made it clear that the Western allies can and will use technology sanctions to control the behavior of China an
60 comments
Read more 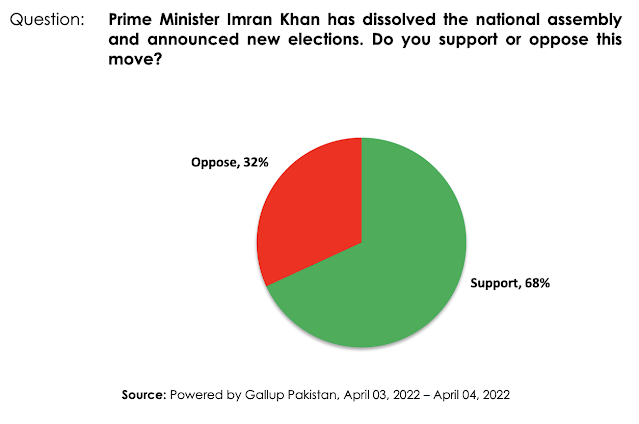 A snap poll conducted by Gallup Pakistan on April 3 and 4 shows broad support for Prime Minister  Imran Khan 's decision to seek dissolution of the National Assembly and call fresh elections.  Support for the decision is nationwide with 66% in Punjab, 69% in Sindh and 78% in KPK province. It is the strongest among those identifying themselves as PTI voters with 95% of them approving the decision. Among the Opposition parties, 44% of PMLN voters and 50% of PPP voters agree with the decision.   Source: Gallup Pakistan Here are the key findings of the  Gallup Pakistan Poll :  1) Widespread support for dissolution of National Assembly in Pakistan Respondents were asked ‘ PM has dissolved the national assembly and called for fresh elections. Do you Support or are you against this’ To this question a wide majority 68% say they support and 32% say they oppose PM Imran Khan’s move. Source: Gallup Pakistan 2) Majority don’t believe in US Conspiracy to remove Imran Khan, although split exist
15 comments
Read more

Does Pakistan Have Civil-Military Divide On US Ties? 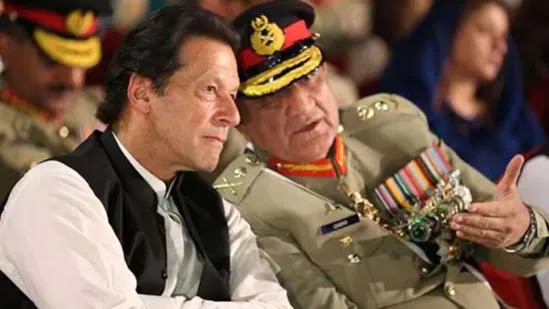 Multiple media reports and analysts have suggested that there is civil-military divide in Pakistan on the question of relations with the United States. These reports cite General Bajwa's statement that "We share a long history of excellent and strategic relationship with the United States" and the fact that this statement came a day after the government of Prime Minister Imran Khan formally protested to the United States for allegedly backing his opponents in a parliamentary no-confidence vote seeking his ouster from power. However, a look at more detailed remarks by General Bajwa at the Islamabad Security Dialogue 2022 (ISD2022) lead to an entirely different conclusion: There is no civil-military divide in Islamabad on the question of US-Pakistan ties.   Prime Minister Imran Khan (L) with General Bajwa Answering a question about US-Pakistan ties at the Islamabad Security Dialogue 2022, Pakistan Army Chief General Qamar Javed Bajwa said China is "off course our nei
9 comments
Read more 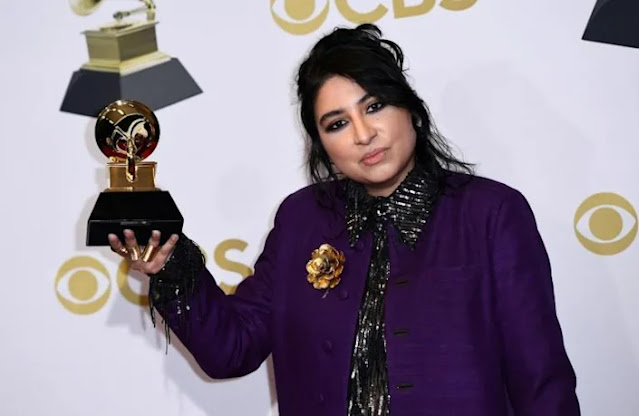