December 07, 2009
I grew up hearing the word jugaad as commonly used in India and Pakistan to describe any unsophisticated, often dangerous, contraption built on the fly to solve a pressing problem to make do in the absence of a better, more elegant solution. Jugaad is how the mechanics in India and Pakistan manage to keep very old and outdated machines running with crudely made parts, long after the original manufacturers have discontinued making them. Now, a few Indian management gurus in the West have a found a way to sell jugaad as a sophisticated management technique to industry and academia. 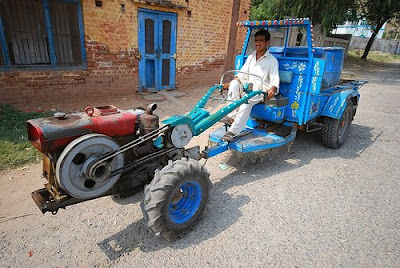 An example of it I saw during one of my visits to India nearly killed me when my driver almost ran into an nondescript vehicle on the road between Delhi and Agra. It was a makeshift diesel engine mounted on a wooden cart with no lights or safety devices of any kind being used in near darkness to transport people. After the near-miss, it was described to me as Jugaad, with the warning to stay away from it, and other contraptions like it.

In a recent Upper East Side New York conference that attracted a dozen executives from companies including investment banks Rothschild and Goldman Sachs (GS) and tech research firm Gartner (IT), the invited speaker Navi Radjou, who heads the recently formed Center for India & Global Business at England's Cambridge University, talked up jugaad as the latest and greatest management innovation from India.

Already, companies as varied as Best Buy (BBY), Cisco Systems (CSCO) , and Oracle (ORCL) are employing jugaad as they create products and services that are more economical both for supplier and consumer, according to Reena Jana of Businessweek. "In today's challenging times, American companies are forced to learn to operate with Plan Bs," notes Radjou. "But Indian engineers have long known how to invent with a whole alphabet soup of options that work, are cheap, and can be rolled out instantly. That is jugaad."

Jugaad is the kind of new fad that has generated a lot of media buzz, thanks to the hype about everything Indian in the Western Press. Beyond the Businessweek story, the popular TechCrunch website has a post with the headline: "Can India Jugaad Its Way to Angel Investing?" The Wall Street Journal decided not to be left out of the buzz by publishing an article titled: " India's Indigenous Genius: Jugaad".

The idea that global companies can do good and do well at the “bottom of the pyramid”—that is, among the poor populations of developing countries—has generated excitement among corporations, governments, and NGOs in recent years.

Understanding the need to design for extreme affordability with scarce resources is giving birth to a new generation of entrepreneurs. These are entrepreneurs with a social conscience who are motivated by the desire to do good and do well at the same time. They are finding new ways to empower the poor by satisfying their basic needs, such as water, electricity and telephones, but the jugaad concept being taught by the Indian management gurus is definitely not for the social entrepreneurs in South Asia.

Personally, I think this jugaad idea is just another management fad, and a potentially dangerous one that encourages cutting every possible corner. "Jugaad means "Somehow, get it done", even if it involves corruption," cautions M.S. Krishnan, a Ross business school professor. "Companies have to be careful. They have to pursue jugaad with regulations and ethics in mind."

Even the Poor Can Be a Thriving Market