June 15, 2010
Cost arbitrage that began with call center outsourcing from the West to India has now found its way into the low-rent wombs of poor Indian women! This new growing business has created a global supply chain with low-cost human babies as the final product brought to the West. This business can cut the cost from over $100,000 in the U.S. to less than $6000 per baby in India. It is explained in an Israeli documentary "Google Baby" scheduled to be aired on HBO in the United States tomorrow. The movie follows an Israeli gay man who decided to have low-cost test-tube babies by outsourcing the job to India. 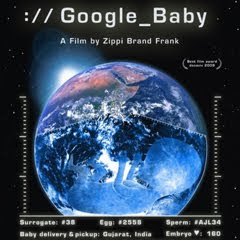 Wealthy Americans and Europeans, gay or straight, can now shop online for an egg from an egg donor in the West, use their sperm or from sperm another western donor, and implant the embryo into a surrogate mother in India. These people don't want their European genes to be mixed with those of the poor women in India, but the Indian women are acceptable as cheap surrogate mothers.

On NPR Talk of the Nation show aired today, the show host Neal Conan and Google Baby producer Zippi Brand Frank introduced the basic idea of surrogacy in India in the following exchange:

"CONAN: And essentially your film follows a young man from Israel who has been -he and his partner have adopted a baby, has gotten a surrogate baby themselves from the United States. And he says in the end it ended up costing him $140,000. And he thinks, wait a minute, everything else is being outsourced to India. Why not this?

Ms. FRANK: Exactly. That's what - that's exactly his start-up(ph). I mean he did it - he did his first baby through 100 - he paid 140,000 U.S. dollars and he decided he's going to find the cheapest way to do the other babies. And now his business is really growing rapidly, I would say. And it costs, if you go to India and you still want to have a Western egg donor but you can, you know, you can compromise for an Indian surrogate mother, so you pay only 40,000 U.S. dollars, and that's the maximum you can get for a baby."

The NPR radio show featured a couple of soundbites from an Indian obstetrician Dr. Nayna Patel in Anand, Gujarat, who is actively promoting her India-based surrogacy business in the West.

"Dr. NAYNA H. PATEL (Akanksha Infertility Clinic): Hello? Yes. I'm so sorry, Doctor, but you know it's not an easy procedure. It's a very complicated procedure, surrogacy, and they should understand all the implications before they go into it. Yeah? So that - yes. The husband and wife themselves should come, understand the whole procedure, and then decide whether they would want to go for it or not, okay? When they come personally we can discuss it, okay? Okay. Welcome. Bye-bye. No, no, no, most welcome. Bye-bye."

Dr. Nayna Patel's IVF and cheap surrogacy business has dramatically picked up since her appearance on Oprah Winfrey Show back in 2006.

It is common in the United States for IVF children to know and maintain contact with their surrogate birth mothers. However, the poor Indian mothers do not want to acknowledge their surrogate status in public, nor do they want any connection with the babies they carry to term because of social taboos. Critics argue that the surrogacy practice in India is not only exploitation of poor women, but it is also a violation of the UN Convention on the Rights of the Child which states that all children have a right to know their parents.

Here is a video on ethical and moral implications of legalized commercial surrogacy in India:

Status of Women in India

A Tale of Tribal Terror

Female Literacy Lags Far Behind in India and Pakistan

Can the promise of a car or a mixer grinder help keep India's population in check?

Well, that's what health authorities in the northern state of Rajasthan apparently believe. They are offering a cheap car, among other things, as a prize in an attempt to sign up some 20,000 people to meet an ambitious sterilisation target. Time will tell whether this turns out to be another gimmick or an innovative incentive.

But what worries many is the ethics of such sterilisation drives in a largely patriarchal society like India.

As population expert Usha Rai says, the promise of such lucrative incentives typically make husbands push their wives to undergo sterilisation and avoid a range of contraceptives that are available to help limit the size of their families. There's enough evidence to support this concern.

In India's most populous state, Uttar Pradesh, with 200 million people - and an economy the size of Qatar which has a population of less than 2 million - the bulk of women who use any modern method of family planning get sterilised.

Ever since the 1970s India has used a combination of coercion and incentives to carry out sterilisation drives to check population growth.

During the 22-month-old memergency in the mid-1970s when prime minister Indira Gandhi suspended democratic rule, the government embarked on a draconian campaign to sterilise poor men - they were dragged into operating theatres in makeshift camps, and police surrounded entire villages at night and herded the men into the camps. ....

Even the Planning Commission admits that female sterilisation has become the mainstay of the programme. High levels of infant and child mortality and preference for sons means that women delay sterilisation.

Experts believe that women should be offered more reversible choices of contraception like injectibles and implants which are not presently offered under India's family planning programme.

More importantly, they say, men should be pushed to take more responsibility for limiting their family - male methods account for only 6% of contraceptive use in India. Should women be bearing the brunt?


Commercial surrogacy in India has become a profiteering business with an annual earning of $1 billion.

Most pregnant mothers are kept in Shelter Homes during their days of confinement; critics have dubbed these homes as “baby factories”.

Why do women take such a step?

An 18-year-old surrogate mother Vasanti, said, “In India, relationships and family are very highly valued. One can do anything for one’s children. I have become a surrogate mother so that I can provide my children with all the very best in life, which I have only dreamed of.”

Vasanti is at present pregnant; but the child protected in her womb is not her own, instead it belongs to a Japanese couple. Vasanti shall be paid $8000 for her troubles.

Such a huge amount is like a dream to Vasanti, who can now build a new home and also educate her kids, who are seven and five years of age. With regards to the impending payment, Vasanti declared that she was extremely happy with the arrangement.

The procedure for injecting her womb with the embryo of the Japanese couple was undertaken in the Akanksha IVF Centre in Anand town of the Gujrat state. She has been moved to a nearby temporary shelter home provided by the centre, where she will continue to live for nine months.

This home houses a 100 other surrogate mothers just like Vasanti. All of these women are under the supervision of gynecologist, Doctor Nayana Patel.

Each room in the shelter home is allocated to 10 surrogate mothers, who are provided with food and vitamins. They are also instructed to rest regularly; Vasanti however does not rest that often.

“I keep roaming around here and there at night because I can’t sleep. As the child in my womb grows, I am beginning to get bored. I want to go home as soon as possible, back to my husband and children.”

According to the rules and regulations of the shelter home, pregnant surrogate mothers are prohibited from indulging in sexual acts. These women are also very explicitly told that in case of any complexities, the doctors, the parents who have donated the embryo(s) and the hospital will not be liable to pay for any damages.

If a surrogate mother carries twin embryos until the time of delivery she is paid $10,000 but if she suffers a miscarriage during the first three months, then she is only paid $600 for her troubles....

Top two international medical journals, New England Journal of Medicine (NEJM) and The Lancet, were recently forced to retract two papers on COVID-19 due to obvious fraud committed by the coauthor Sapan Desai, Chicago-based Indian-American surgeon and businessman, whose analytics company Surgisphere claimed to have stored clinical data from thousands of patients of hundreds of hospitals as part of HydroxyChloroquine (HCQ) study. Dr. Amit Patel and Dr. Madeep Mehra, both of whom are American-Indians, claimed to be the lead authors of the papers published in The Lancet and NEJM. The drug was promoted by US President Trump as a way to treat COVID patients. The study claimed to have looked at data from 671 hospitals across six continents related to 96,000 patients. The authors claimed that 81,000 hospitalized patients were not given HCQ but 15,000 were given HCQ which has been widely used to treat malaria patients.

It all turned out to be fake. But it forced World Health Organization (WHO…
Read more