Deprivation Index: Indians Worse Off Than Africans and Pakistanis

July 18, 2010
A new multi-dimensional measure of poverty confirms that there is grinding poverty in resurgent India. It highlights the fact that just eight Indian states account for more poor people than the 26 poorest African countries combined, according to media reports. The Indian states, including Bihar, Uttar Pradesh and West Bengal, have 421 million "poor" people, compared to 410 million poor in the poorest African countries. 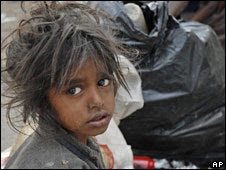 Developed at Oxford University, the Multidimensional Poverty Index (MPI) goes beyond income poverty based on $1.25 or $2 a day income levels. It measures a range of "deprivations" at household levels, such as schooling, nutrition, and access to health, clean water, electricity and sanitation. According to Oxford Poverty and Human Development Initiative (OPHI) country briefings 2010, 55% of Indians and 51% of Pakistanis are poor.

Among other South Asian nations, MPI index measures poverty in Bangladesh at 58 per cent and 65 per cent in Nepal.

While OPHI's MPI is a significant improvement over the simplistic income level criterion for assessing poverty, it appears that the MPI index gives nearly three quarters of the weight to child mortality and school enrollment, and just over a quarter of the weight to a combination of critical factors such as access to electricity, sanitation and clean drinking water which are essential for proper learning environment, increased human productivity and healthy living.

South Asians face a massive challenge in overcoming pervasive poverty that makes the region look worse than the poorest of the poor nations of sub-Saharan Africa.
Just think about the South Asian situation in terms of Maslow's hierarchy of needs. Over 76% of Indians and 60% of Pakistanis living on less than $2 a day are busy struggling at the bottom of the pyramid to satisfy their basic physiological needs. They have no time or to think about freedom and democracy which belong near the top of Maslow's pyramid. It will take a lot more than the usual rhetoric of freedom, democracy and human rights to help them. It will take serious and focused effort to improve their situation through better governance and greater spending on human development. Real progress will not happen as long as South Asians hang the petty thieves and elect great ones to high offices.

Here is a video clip about grinding poverty in resurgent India:

Orangi is Not Dharavi

Bollywood and Hollywood Mix Up Combos

Slumdog Is No Hit in India

UNESCO Education For All Report 2010

Food, Clothing and Shelter in India and Pakistan

Riaz Haq said…
Here is a quick comparison of different sectors of the economy in India and Pakistan in terms of employment and GDP contribution:

It shows that Indians in manufacturing and services sectors add more value and produce higher value goods and services than their Pakistani counterparts.

Clutching photocopied ID cards in bony fingers, a roomful of Pakistan's poorest women sit on gray plastic chairs and wait in silence for something many have never experienced: a little bit of help from the government.

It comes in the form of a debit card that is topped up with the equivalent of $30 every three months, enough to put an extra daily meal on the table, buy a school uniform or pay for medical treatment in a country where soaring food and fuel costs are hurting millions who already live hand-to-mouth.

The program is something of a success story for a government widely seen as corrupt and inefficient, as well as for international donors that help implement and fund it. But the very need for the scheme highlights the poverty stalking a country whose stability is seen as key to the fight against Islamist extremism.

Other cash-transfer programs in Pakistan have been plagued by graft and allegations that only supporters of the party in power received the funds. Many feared this program, named after Benazir Bhutto, the late wife of President Asif Ali Zardari, would go the same way.

But that hasn't happened, at least not significantly. The Benazir Income Support Programme is modeled on similar efforts in Africa and South America, part of a quiet revolution in the way countries and development agencies are helping the poor. Initial concerns that recipients would fritter away the money have proven unfounded, and giving cash is now accepted as a vital and cost-effective aid tool.

"I spend the money on my kids, what else would I do?" said Rifat Parveen, a mother of five who sometimes has to serve only bread and boiled chili peppers for the evening meal. "Even if a poor person gets 10 rupees (5 cents), he or she will be grateful."

When a woman is called, she goes to a room where her identity is checked against an electronic database and her thumb print taken electronically. A bank employee then gives her the card — and a crash course in how to use it — before she returns to her village.

As they do elsewhere in the world, women in Pakistan must receive the money on behalf of their families because research shows they spend it more responsibly than men do. They must also first obtain a valid identity card to be eligible. Both requirements have been credited with pushing women, discriminated against in Pakistan, a little into the mainstream.

Their biggest challenge at the moment is to explain how nearly seven million Pakistanis have come out of the vicious cycle of poverty.

“The biggest challenge in front of us is how to explain this figure to the masses and economists when the economy grew at an average rate of 2.6 per cent and average inflation remained above 15 per cent during the last four years,” a member of the committee told The Express Tribune requesting anonymity due to political sensitivity attached to the figure.

In 2007-08 when the Pakistan Peoples Party-led coalition government took over, poverty had been assessed at 17.2 per cent. But the government decided not to release the figure saying poverty was at 35-40 per cent. It shared 40 per cent figure with Friends of Democratic Pakistan in its maiden meeting held in Tokyo.

It is facing the same dilemma exactly after four years, as its own people are now telling that poverty has declined to 12 per cent.

The committee member said that poverty has been worked out on the basis of consumption method. According to this method, if a person takes 2,350 calories per day that costs him slightly over Rs1,700 per month that person is taken as above the poverty line.

The official said that the committee has not formally submitted the poverty report to the Planning Commission, but it is expected to submit the report over the next couple of weeks. However, the committee has already shared its findings with the commission.

A senior government official, who also wished to remain anonymous, said that the concerned authorities were considering the poverty figure and framing their mind whether to release it or not. It is not yet clear whether the government would publish the poverty estimates in the Economic Survey of Pakistan 2011-12.

The committee member, while giving justifications for the decline in poverty despite harsh ground realities, said that poverty declined because of higher support price of major crops, especially wheat, healthy trend in inflows of remittances and impact of assistance provided by both the government and private sectors in the flood affected areas of the country.

The 2017 global Multidimensional Poverty Index (MPI) provides a headline estimation of poverty and its composition for 103 countries
across the world. The global MPI measures the nature and intensity of poverty, based on the profile of overlapping deprivations each poor
person experiences. It aggregates these into meaningful indexes that can be used to inform targeting and resource allocation and to design
policies that tackle the interlinked dimensions of poverty together.
Sabina Alkire and Gisela Robles


• Half of the MPI poor people live in destitution.
• In six countries and 117 subnational regions, 50% or
more of people are destitute.
• Most of the highest levels of destitution are found in SubSaharan
Africa.
• Pakistan has more destitute people – 37 million – than
East Asia and the Pacific (26 million) or the Arab States
(26 million).
• India has more destitute people (295 million) than SubSaharan
Africa (282 million).