September 17, 2010
Gross domestic product (GDP) is calculated by adding up public and private consumption, investments and net exports (exports-imports). Some of the major world economies, most notably Germany and China, are led by exports, while others, such as United States, United Kingdom, India and Pakistan, are primarily domestic consumption driven.

With almost 80% of its GDP from consumption, Pakistan has particularly heavy reliance on domestic public and private spending for its economic health. This is much higher than the US consumption accounting for over 70% of its economy, and India's 60%.

As Pakistan's GDP has more than doubled over the last decade, its FDI has increased dramatically and its exports have grown at 16% CAGR till 2007, the consumption component has continued to be stubbornly high at about 80%, with about 20% of it coming from investments and exports. By contrast, India's consumption component has declined from 80% to 60% with its investment and export components rising to more than 30% during the same period.

While the rest of the developed economies stagnate, the German formula seems to be working well, with exports driving the nation’s strong recovery. The German economy grew 2.2 percent in the second quarter from the first, yielding an annualized growth rate of about 9 percent that puts it on a footing with emerging markets like China and India.

In spite of the fact that about 80% of Pakistan's GDP depends on domestic consumption, the nation has been highly vulnerable to external shocks related to the need for imports, particularly the oil price volatility. Energy accounts for about a third of Pakistan's imports, and as the speculators drove oil prices to over $150 a barrel in 2008, the nation found itself unable to pay for imports, and sought bailout by the International Monetary Fund in 2008.

While the country was moving rapidly towards the IMF, former economic adviser Prof. Ashfaque Hasan Khan recalls that Pakistan's ministry of finance had prepared the plan to bring $4 billion by June 30, 2008 through four transactions. A kick-off meeting was scheduled on April 23, 2008 at the ministry to give a final touch to the various roadshows. These transactions were canceled on April 20, 2008. Who ordered the cancellation of $4 billion transaction? This cancellation prompted the latest balance of payment crisis and the rest became history.

Since the major missteps by the Zardari government in 2008, the economic crisis has worsened as the investors have pulled out and business confidence plummeted amidst serious security concerns raised by the Taliban insurgency in the country. It has also hurt Pakistan's exports. The recent devastating floods have added to the already serious economic woes. The only positive news has been the rising remittances by overseas Pakistanis which increased to nearly $9 billion last year. 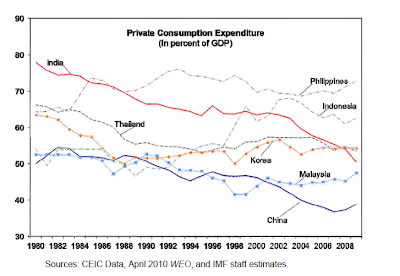 Several East Asian and South East Asian nations faced a similar financial crisis in 1997 which required IMF bailout. Since the 1997 crisis, most of these Asian nations have significantly expanded their exports and built up large dollar reserves to deal with external shocks effectively. In addition, the Association of South East Asian Nations (ASEAN) has banded together with China, South Korea, and Japan to form the "ASEAN Plus Three" financial grouping. This arrangement is designed to enable member countries to swap reserves if speculators again target their currencies.

In addition to reviving the national economy from its current slump, the biggest long-term challenge for Pakistan's economic leadership is to improve the nation's ability to deal with external and internal shocks. This will require learning from the experience of India or other Asian economies in building sufficient internal revenue base for public expenditure, attracting greater foreign investment, expanding and diversifying exports and strengthening hard currency reserves. Inability to deal with these challenges will doom Pakistan to perpetual dependence on IMF and consequent loss of sovereignty to it.

Incompetence Worse Than Corruption in Pakistan

After Partition: India, Pakistan and Bangladesh

The "Poor" Neighbor by William Dalrymple

Video: Who Says Pakistan Is a Failed State?

Food, Clothing and Shelter in India and Pakistan

Lahore: After exporting the motorcycles now Pakistan is ready to export CNG rickshaws to eight countries.

Chief executive, Sazgar engineering company, Mian Asad Hameed said that in the phase they were exporting around 150 rickshaws to eight countries and will increase the numbers gradually.

“We have delivered 22 rickshaws to Nigeria whereas we have received order for 40 rickshaw from Egypt,” he added.

He further said, “we are reviewing the possibility of export the vehicle to Srilanka and Indonesia.”

It is to be mentioned here that due to the prolonged outbreaks in Pakistan, industry faces severe crisis but this step would have positive impact on exports.