March 05, 2014
When the British arrived in Mughal India, the country's share of the world GDP was 25%, about the same as the US share of the world GDP today. By 1947, undivided India's share of world GDP ($4 trillion in in 1990 Geary-Khamis dollars) had shrunk to about 6% (India: $216 billion, Pakistan: $24 billion). Since independence, India's contribution to world GDP has shrunk further to about 4%, according to British Economist Angus Maddison who died in 2010.

The colonization of India and many other nations in Asia and Africa began with the advent of the Industrial Revolution in Europe which resulted in a major power shift from East to West over the time-span of just a few decades. Prior to the Industrial Revolution, the world depended mainly on agriculture based on human and animal muscle power. Countries with large populations and farmlands had large share of the world GDP.  The per capita productivity differences among nations and regions were relatively small. The machine age changed it all. Those who used machines became much more productive and significantly richer than the rest. 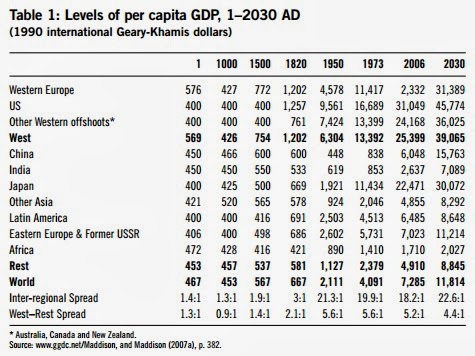 While it is a fact that India's total GDP was at one point the highest in the world, does it mean that the average Indian was richer than his or her counterparts elsewhere in the world? To answer this question, let's look at Maddison's figures for per capita GDP in various parts of the world. 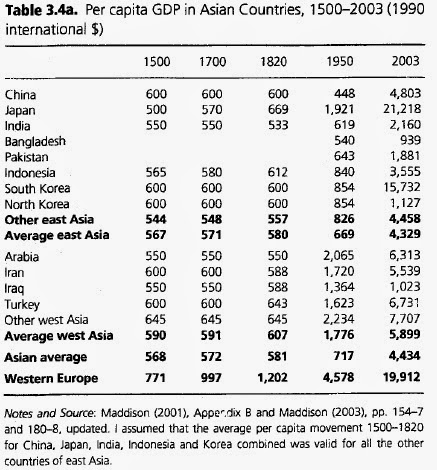 While India today has the world's largest population of poor, it is still richer than it has ever been in terms of per capita incomes. Indians are also living longer than ever in the country's history; average life expectancy in India has risen from just 23 years in 1800 to 65.5 years now. However, India continues to significantly lag the rest of the world on both economic and social indicators.

Can Superpoor India Become a Superpower?

Riaz Haq said…
#India's GDP numbers are so dodgy that even the nation's central bank has doubts about them. #Modi #BJP http://qz.com/610767 via @qzindia

The skepticism arrived soon after India’s Central Statistical Office (CSO) put out revised GDP numbers last January.
India’s chief economic advisor, Arvind Subramanian, said he was puzzled and mystified by the revised estimates based on a new methodology, which instantly raised the country’s GDP growth from 4.7% to 6.9% for the 2013-14 fiscal year. Ruchir Sharma, head of emerging markets and global macro at Morgan Stanley Investment Management, called it a “bad joke.” And Raghuram Rajan, the governor of the Reserve Bank of India (RBI), said he didn’t want to talk about it until he understood the numbers better.
A whole year later, institutions like the RBI are so befuddled—and seemingly unconvinced—by India’s revised GDP numbers that they are looking at a range of other indicators to understand the true state of Asia’s third-largest economy.
“Like other economists, the RBI is now turning to hybrid models that mix elements of the old and new GDP methods to get a better feel for the underlying health of the economy,” Reuters reported on Feb. 5.

In particular, India’s central bank is tracking two-wheeler sales, car sales, rail freight, and consumer goods sales in rural areas “to get a better understanding of the ground realities,” an RBI official told Reuters. Quartz has emailed the RBI for comment, and will update if the bank replies.
The key contradiction is that even as prime minister Narendra Modi makes public declarations of India’s newfound status as the world’s fastest-growing major economy, key sectors such as manufacturing and agriculture are still stuck in a rut.
“The economy is recovering but it’s hard to be very definitive about the strength and breadth of the recovery for two reasons—economy is sending mixed signal and second there is some uncertainty how to interpret GDP data,” Subramanian explained late last year.
February 6, 2016 at 9:55 AM

Riaz Haq said…
Under the #Mughals , #India grew to be an #industrial powerhouse, overtaking China as the world’s leading exporter, notably of #manufactured #textiles. The global success of Mughal weavers attracted #European traders, among them the East India Company.


By 1264, a bilingual inscription carved on a newly founded mosque in Veraval, near the great Hindu temple of Somnath in Gujarat, gives a picture of a town where two worlds were coming into intimate contact. The Persian text refers to the deity worshipped in the mosque as Allah, and describes the patron who raised it as ‘the sultan of sea-men, the sun of Islam and the Muslims’. By contrast, the Sanskrit text identifies the deity worshipped in the mosque as Visvanatha (‘lord of the universe’) and Sunyarupa (‘one whose form is the void’) and Visvarupa (‘having various forms’), while the patron is described as dharma-bhandaya — a supporter of dharma, the righteous cosmic order of justice and duty, as understood in classical Indian thought.

At the same time, in the eastern Gangetic plains, the earliest genre of Hindi literature — the so-called premkhyans, or Sufi romances — were being written in the Persian script. These

narrated the seeker’s mystical quest for union with God, but did so using characters who were ostensibly Hindu in name and cultural and religious practices, in a landscape saturated with Indian deities, mythology, flora and fauna.

Before long, in medieval Hindu texts from south India, the sultan of Delhi was being talked about as the incarnation of the god Vishnu.

This cultural mixing took place with ever greater thoroughness and complexity throughout the subcontinent over the next 600 years. Entire hybrid languages — notably Deccani and Urdu — emerged, mixing the Sanskrit-derived vernaculars of India with Persian, as well as Turkish and Arabic words. It was a process that went both ways. The great Hindu rajas of Vijayanagara described themselves as ‘sultans among Hindu kings’, and adopted Islamicate dress: Persian tunics of Chinese silks called qabas, and tall, brocaded, brimless Persian headgear called kulahs. At the same time, the Mughal Emperor Akbar ‘adopted a vegetarian diet and shortened his hair in the manner of religious ascetics’. He also abolished pilgrimage taxes on non-Muslim institutions and the jizya head tax on non-Muslims, banned the killing of cows and peacocks, and began giving generous land grants to Hindu temples.

In his court, Persian translations of the Mahabharata and Ramayana from Sanskrit were commissioned, just as elsewhere Persian romance narratives such as Nizami’s Layli va Majnun and Jami’s Yusuf va Zulakha were being translated into numerous Indian languages. By the 17th century, Akbar’s great grandson, the crown prince Dara Shikoh, had composed a singular study of Hinduism and Islam, The Mingling of Two Oceans, which stressed the affinities of the two faiths, and what he believed to be the Vedic origins of the Koran.

Under the Mughals, India grew to be an industrial powerhouse, overtaking China as the world’s leading exporter, notably of manufactured textiles. The global success of Mughal weavers attracted European traders, among them the East India Company. ‘India is rich in silver,’ noted the English merchant William Hawkins in 1613, ‘for all nations bring coyne and carry away commodities.’
December 6, 2019 at 1:42 PM

Now Hindutva rulers are trying to erase Muslim history in India. They can not succeed.

Watch Prof Roy Casagranda explain it in detail in the following video: