March 12, 2017
How does President Trump's latest travel ban on citizens of 6 Muslim nations differ from his earlier executive order blocked by courts? Will the new order face similar block? What is the economic impact of Trump's travel ban on US travel and tourism industry? Will it lead to increased trade deficit and job losses? 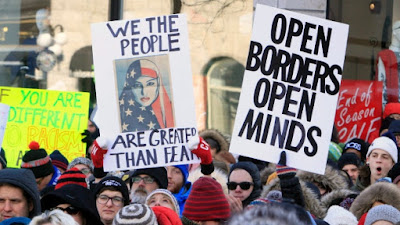 What does the latest Transparency International's Asia survey say about the prevalence of bribery in India and Pakistan? Which countries are the best and the worst? Who are the biggest victims of such bribery? The rich or the poor?

Why is Imran Khan critical of the successful Pakistan Super League final in Lahore, Pakistan? Why did he denigrate foreign players who came to Pakistan to play the final? Does his language border on racism? What did PMLN's Javed Lateef say about PTI's Murad Saeed and his sisters that so enraged Murad Saeed and Imran Khan? Is such verbal and physical abuse justified for parliamentarians?

The success of the (PSL Final) match (in Lahore) was a rare bit of good news for Pakistan’s cricket industry, which has lost millions of dollars in revenue since militants attacked a bus carrying the Sri Lankan cricket team to the same stadium in Lahore eight years ago. Companies including MCB Bank Ltd. and PepsiCo Inc. want to leverage the sport to reach out to fans in the cricket-crazy nation of 200 million people, where Euromonitor International estimates disposable income has more than doubled since 2010.

After successfully hosting the final, Pakistan is hoping to show investors it can safely hold and build a sports industry that’s a fraction of the size of neighboring rival India, home to cricket’s largest market. Only Zimbabwe has played an international match in Pakistan since the attack on the Sri Lankan team.


The PSL, which started holding fixtures a year ago, has a market value of up to $300 million, said Arif Habib, a business tycoon and PSL director. That could increase as much as five-fold if more matches were played at home, he said. That compares with London-based Brand Finance’s $3.5 billion valuation of the Indian Premier League. It would also be a positive signal to investors looking at the country’s security climate.

“That will encourage others to come here,” Habib said in an interview in his Karachi office decorated with cricket trophies. “The perception of Pakistan is worse than it really is.”

Introduced to the region during the colonial era by the British East India Company, cricket is the most popular sport in South Asia and is often said to be an obsession.

Pakistan’s household consumption has risen to 80 percent of the nation’s gross domestic product in 2015 from 68 percent in 1990, World Bank data show. That compares with 59 percent in India and a global average of 58 percent.

“There’s tremendous potential,” Shahryar Khan, the chairman of the Pakistan Cricket Board and a former foreign secretary, said in an interview at the stadium. “The whole object of the exercise is to open the doors to foreign teams coming here and feeling relatively safe.”

Pakistan plans to build secure accommodation for international teams, with negotiations underway with Serena Hotels LLC for five-star lodging next to Karachi’s stadium, he said. When asked if there are now plans to bring back international games to Pakistan, the International Cricket Council said its board will consult with security experts and its Pakistan task team next month to decide on future steps.

Yet despite the purchase of bullet-proof vehicles and offers to foreign players of thousands of dollars, many of the international stars, including England’s Kevin Pietersen playing for Quetta Gladiators, refused to travel to Pakistan, where Peshawar Zalmi won the title.

Critics of the cash incentives for overseas players include Imran Khan, the 64-year-old former national cricket captain who led Pakistan to its only world cup victory in 1992.