Who's Pete Buttigieg بو دجاج ? What Does He Stand For?

February 11, 2020
Thirty-eight year-old Mayor Pete Buttigieg (بو دجاج)  of a small Indiana town of South Bend has so far been the biggest surprise with his surge in Democratic Party primaries for the presidential nomination this year. His strong showing among the top two candidates in Iowa and New Hampshire has been as much of a shock to the pundits as the poor performance of former Vice President Joe Biden who is also seeking the nomination. Mayor Pete is now beginning to get more scrutiny by media pundits and commentators. 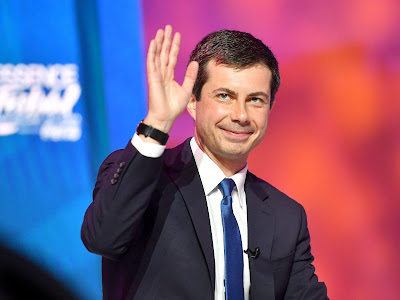 Mayor Pete Buttigieg, 38,  is Maltese-American. His last name literally means "father of chicken".  His parents came from Malta, a small Mediterranean island close to Sicily and North Africa.  His last name is in Maltese, a language strongly influenced by Arabic. It is attributed to settlers from Sicily where Siculo-Arabic was spoken after the island was conquered by the Fatimids from Egypt in the 9th century AD.

Pete Buttigieg (بو دجاج) is the first openly gay leading candidate for the office of the President of the United States (POTUS). He has regularly introduced Chasten Glezman as his husband at his election rallies. Recent surveys show that two-thirds of Americans support gay marriage, an increase of more than 20 points since the turn of the century.

Pete Buttigieg is a graduate of Harvard and Oxford Universities. As a 20 year-old, he served as President of the Student Advisory Council at Harvard University’s esteemed Institute of Politics. He wrote twice-a-month columns in the Harvard Crimson.

After graduating, Pete Buttigieg worked for the elite management consulting firm McKinsey & Co. His work at McKinsey has been criticized by his opponents for helping corporate America move jobs overseas. Some have accused him of being corporations' favorite. He has received large contributions from the biggest US corporations.

As a millennial, Mayor Pete is the youngest candidate in a field dominated by senior citizens. He is openly gay, millennial and a veteran of the war in Afghanistan. Buttigieg served in Afghanistan for 7 months in 2014 as a lieutenant in US Navy Reserve. He speaks English, Norwegian, Spanish, French, Italian, Maltese, Arabic, and Dari.

He is close to the center of the Democratic Party when compared with his main rivals in the primary.
He opposes Medicare For All but supports universal health coverage. He favors granting citizenship to Dreamers, the people who were brought to the United States by their parents illegally when they were children.

Unlike Bernie Sanders who wants to cut US aid to Israel, Buttigieg has said he would consider using it to “leverage” Israel to change its policies toward the Palestinians.

“I’m not going to commit now to all of the ways that that leverage can and should be used, but I will say that our policy goal will be to do what we do when a friend is moving in a way that you’re worried about, which is to put your arm around them and guide them somewhere better,” he said.

Mayor Pete Buttigieg is the first openly gay presidential candidate in US history. He is also the youngest person to seek the nomination. His Maltese name Buttigieg  بو دجاج  is of Arabic origin. It means father of chicken.  He is a small town mayor from South Bend, Indiana, who has so far been the biggest surprise with his surge in Democratic Party primaries in Iowa and New Hampshire. He is considered a moderate in the Democratic field.  Even though he wants to reverse 2017 corporate tax cuts but some accuse him of being a corporate candidate and the recipient of large donations from the biggest US corporations. He supports increasing federal minimum wage to $15 an hour and favors universal health coverage. He also supports granting US citizenship to Dreamers, the people who were brought to the United States by their parents illegally when they were children.


“AIPAC claims to be a bipartisan organization, but its use of hate speech actually makes it a hate group,” US Rep. Betty McCollum, a Democrat, said Wednesday in a statement. “By weaponizing anti-Semitism and hate to silence debate, AIPAC is taunting Democrats and mocking our core values.”

The American Israel Public Affairs Committee declined to comment. The lobby removed and apologized last week for at least two Facebook ads that slammed “radical” Democrats in Congress, and altered an online petition that said Israel’s harshest critics in Congress pose a threat “maybe more sinister” than ISIS and other terror groups.

On Twitter, McCollum rejected what she called AIPAC’s “non-apology.” In its statement of apology, AIPAC said the ad was poorly worded” and “inflammatory,” but also said it “alluded to a genuine concern of many pro-Israel Democrats about a small but growing group, in and out of Congress, that is deliberately working to erode the bipartisan consensus.”


One of the ads was illustrated by a collage of three of Israel’s toughest critics in Congress, including McCollum, who is the lead sponsor of a bill that would link Israel’s assistance to its treatment of Palestinian juvenile detainees.

McCollum publicly rebuked AIPAC in 2006 after a lay leader of the group lashed out at her for backing funding for the Palestinians.

Vermont Senator Bernie Sanders is on the verge of racing ahead of the pack in the Democratic primaries winning both New Hampshire and Nevada.

What might come as a surprise to many, given the rise of Islamophobia in the US, is that his campaign is being led by an American Muslim.

Faiz Shakir carries the distinction of being the first Muslim and first Pakistani American to head up a major presidential campaign.

Bernie Sanders has always spoken out vigorously on race issues and is a prominent opponent of US President Donald Trump’s ‘Muslim ban’, which prevents residents from a number of majority Muslim countries from entering the US. Nevertheless Shakir’s inclusion in the campaign in such a prominent way, will be seen as a milestone for the American Muslim community.

The 41-year-old previously served in advisory roles to politicians, as well as private organisations.

Born in Florida to a Pakistani immigrant family, Shakir completed a degree in government at Harvard University before gaining a law degree from Georgetown.

An avid baseball player during his time at Harvard, Shakir credited the sport with introducing him to different cultures, a fact that he says has helped his career.

“Baseball was everything for my life, in terms of opening up my life to education opportunities. All of my friends and networks even to this day are a lot of friends that I acquired from baseball,” he said.

After graduating, Shakir served as a communication aide for the White House Office of National Drug Control Policy and as a legislative aide to Senator Bob Graham.

During John Kerry’s presidential campaign in 2004, Shakir also worked as a junior staffer. A year later, he worked as a policy adviser for the Center for American Progress, and helped launch the ThinkProgress blog. Between 2007 and 2012, he was the editor-in-chief of the blog.

In later roles, Shakir served as an adviser on new media to House Speaker Nancy Pelosi and as a senior adviser to Democrat Senate Leader Harry Reid in Nevada.

Before joining the Bernie Sanders campaign, Shakir also served as the political director for the American Civil Liberties Union (ACLU). He was one of the people involved in launching the People Power website, which encourages people across the US to mobilise in defence of civil liberties.