February 13, 2008
In addition to the performance of BSE-30 index, there are two recent reports that seem to suggest that Indian and foreign investors are starting to worry about the bubble in Bombay. The first report indicated that Reliance Power IPO did not meet expectations. While the issue price was Rs. 450, it opened at Rs. 530 but declined soon after closing at Rs.372. The second report said Emaar, the Dubai-based real estate giant, has decided to delay its Indian IPO.

With the impressive growth in the Indian economy and very healthy returns in the stock market for several years, a lot of investors have flocked to Bombay to profit from Indian stocks. This phenomenon has pushed the P/E ratios of Indian shares to new heights. According to the Bombay Stock Exchange which computes PE for its dozen odd sectoral indices, the average PE of BSE Realty Index was as high as 71.55 as on January 4, while the average PE ratio for BSE Capital Goods was second highest at 51.20. The BSE Power Index PE ratio was at 42.94. The P/E ratio for Sensex is 28.31. This compares favorably with Shangai stocks average P/E ratio of 33, which also is considered to be a bubble by many analysts. These PE ratios are about twice the PE ratio of 16.21 for Karachi KSE-100, making it an attractive opportunity for investors willing to accept political risks. Merrill Lynch Chief Strategist Mark Matthews believes that these political risks are worth taking for the bargain basement share prices and high returns based on the KSE track record. 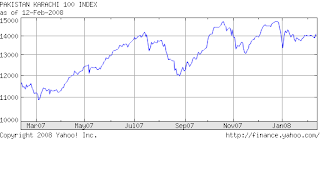