April 26, 2008
The prices of rice, chappati, besan, daals, spices and almost all staples consumed by silicon valley South Asians have experienced triple digit price inflation during the last year. After reading about food price inflation and shortages of staple foods in their home countries, Pakistanis and Indians are now feeling the pinch in Silicon Valley as Basmati rice is in very short supply even with a 300% price jump. Jasmine rice, preferred by East Asians, has also disappeared from the grocery shelves at Costco stores. Costco management has decided to limit each customer to two bags of rice to control panic buying or profiteering. 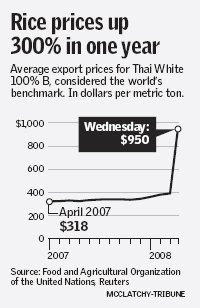 Even with these dramatic price increases, the impact on their wallets from food price inflation is relatively small because Silicon Valley South Asians spend a much smaller percentage of their incomes on food than their friends and families in South Asia. Nonetheless, higher energy costs and the costs of various goods and services used by them everyday is causing them to be careful with their monthly budgets.

Many governments, including India's and Pakistan's, realize the possibility of civil unrest in the event of severe food shortages or famine, and some have taken minimal steps to ease the crisis in the short term, such as reducing import tariffs and putting export restrictions. On December 20, China did away with food export rebates in an effort to prevent domestic shortages. Russia, Kazakhstan, and Argentina have also implemented export controls.

According to reports from London this week, the executive director of the World Food Program, Josette Sheeran, warned that more than 100 million people will be pushed into poverty by a "silent tsunami" of sharply rising food prices. "This is the new face of hunger - the millions of people who were not in the urgent hunger category six months ago but now are," Sheeran said. "The world's misery index is rising."

The Bush administration, after sitting on the sidelines for months, is finally taking notice of the situation. The Washington Post reported today that the administration and Congress have been caught flat-footed by rapidly escalating global food prices and are scrambling to respond to a crisis that they increasingly view as a threat to U.S. national security, according to government officials, congressional staffers and human rights experts.

Among the major international concerns about "instability" leading to increased threats of "terrorism", the food price inflation and shortages of staples have now risen near the top. However, the $200m allocation by the US is much too small to deal with the global nature of this crisis. The Secretary of State Condoleezza Rice said the administration is planning “further steps to help ease the burden of rising food prices on the world’s neediest people.” Options include building more overseas storage facilities and roads to reduce food spoiling, and making the food crisis a top priority for the G-8 summit of industrialized nations in July, administration officials said. Top Senate Democrats, meanwhile, are pressing the White House to devote more money to emergency food aid — up from $350 million to $550 million — as part of a supplemental Iraq war budget package.

The consensus seems to be emerging in Washington that these are just the first steps toward a bigger commitment with a comprehensive strategy to follow soon.

...The United States Food and Drug Administration will soon release a comprehensive analysis that pinpoints imported spices, found in just about every kitchen in the Western world, as a surprisingly potent source of salmonella poisoning.

Each year, 1.2 million people in the United States become sick from salmonella, one of the most common causes of food-borne illness. More than 23,000 are hospitalized and 450 die. Symptoms include diarrhea, fever and abdominal cramps that begin 12 to 36 hours after infection and can last three to five days. Death can result when infection spreads from the intestines to the bloodstream and affects vital organs. Infants and older people are most at risk.

Mexico and India had the highest share of contaminated spices. About 14 percent of the samples from Mexico contained salmonella, the study found, a result Mexican officials disputed.

India’s exports were the second-most contaminated, at approximately 9 percent, but India ships nearly four times the amount of spices to the United States that Mexico does, so its contamination problems are particularly worrisome, officials said. Nearly one-quarter of the spices, oils and food colorings used in the United States comes from India.

The findings, the result of a three-year study that F.D.A. officials have on occasion discussed publicly and recently published in the journal Food Microbiology, form an important part of the spice analysis that will be made public “soon,” agency officials said.

“Salmonella is a widespread problem with respect to imported spices,” Michael Taylor, deputy F.D.A. commissioner for food, said in an interview. “We have decided that spices are one of the significant issues we need to be addressing right now.”

Westerners are particularly vulnerable to contaminated spices because pepper and other spices are added at the table, so bacterial hitchhikers are consumed live and unharmed. Bacteria do not survive high temperatures, so contaminated spices present fewer problems when added during cooking, as is typical in the cuisine of India and most other Asian countries.
-------------
Salmonella can survive indefinitely on dried spices, and killing the bacterium on the craggy surface of dried peppercorns without ruining their taste is especially challenging.

Government officials in India emphasized in interviews that spices slated for export are often treated to kill any bacteria. Such treatments include steam-heating, irradiation or ethylene oxide gas. But F.D.A. inspectors have found high levels of salmonella contamination in shipments said to have received such treatments, documents show. Much of the contaminated pepper in the 2010 outbreak had been treated with steam and ethylene oxide and had been certified as tested and safe, officials said.

At another spice farm, in the village of Chemmanar, Bipin Sebastian is in the midst of a four-year transition to organic farming in hope of earning a premium price for his pepper, cloves, cardamom, turmeric and coffee. Mr. Sebastian says he has used government subsidies to buy tarps, netting and a machine thresher.

“We used to put our pepper directly on the ground,” Mr. Sebastian said. “Now, we put down tarps and netting over it to protect it from the birds. And I’ve been getting a higher price. It’s been great.”