August 18, 2011
Nominal per capita incomes in both India and Pakistan stand at just over $1200 a year, according to figures released in May and June of 2011 by the two governments. This translates to about $3100 per capita in terms of PPP (purchasing power parity). Using a more generous PPP correction factor of 2.9 for India as claimed by Economic Survey of India 2011 rather than the 2.5 estimated by IMF for both neighbors, the PPP GDP per capita for Indian and Pakistan work out to $3532 and $3135 respectively. 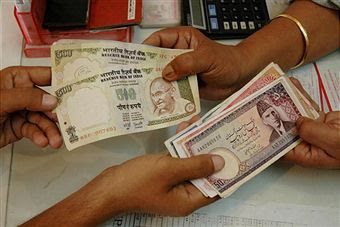 Neither of these figures are adjusted for inflation which has been running in high single digits in India (about 9%) and double digits in Pakistan (about 14%).

Economic Survey of Pakistan 2010-11 puts the nation's population at 177 million and nominal gdp at $222 billion. In terms of purchase power parity with the PPP correction factor of 2.5, it works out to $555 billion PPP GDP.

Looking at the increase in nominal GDP alone can be quite misleading in judging the health of any economy. Other indicators, such as real GDP growth and investments, show that the state of Pakistan's economy is very poor. The nation's GDP grew only 2.4% in real terms in 2010-2011. Domestic investment dropped to a 40-year low of 13.4% of GDP, and foreign direct investment (FDI) declined by 29 percent to $1.232 billion during July-April 2010-11 from $1.725 million in the same period a year earlier.

In addition to improved security environment, Pakistan has an urgent need for serious economic reform, greater social justice and better governance. Unless the PPP government acts to improve this situation, no amount of foreign aid, external loans and other help will suffice. The first step in the process is for the ruling elite to lead by example by paying their fair share of taxes and adopting less extravagant personal lifestyles to get Pakistan's fiscal house in order.

Pakistan's Story After 64 Years of Independence

India and Pakistan Contrasted in 2010

Riaz Haq said…
The BBC reports that inflation hit a high of 9.78% in India:

Inflation in India rose to 9.78% in August, its highest level in a year, officials say.

The increase was mainly due to the rising cost of food, fuel and manufactured goods across the country.

Inflation is a major headache for the Indian government and the central bank has raised interest rates 11 times in 18 months to try to keep a lid on it.

Despite this, a senior government adviser has said he thinks inflation will stay between 9-10% this year.

There are fears that that the Reserve Bank of India will continue to raise rates as inflation has remained high.

Correspondents say that the bank is now in the awkward position of fighting high prices amid mounting worries about the health of the global economy.

The government is projecting growth of 8.5% for the fiscal year that ends next March.

But the growth rate is threatened by the rising prices - which limit domestic consumers' spending power.

A further curb could come from lower export demand as developed countries struggle with low or no economic growth.

Riaz Haq said…
There are a lot of different figures and forecasts floating around different websites and publications that significantly overstate India's GDP and understate Pakistan's.

The figures I have provided here were released in May 2011 by India and in July 2011 by Pakistan. This is the only apples-to-apples comparison that is valid. The rest is irrelevant.

Riaz Haq said…
Sharp fall in Indian currency against the US dollar and slower economic growth have caused India's GDP for Fiscal  Year 2012-13 to shrink in US $ terms to $1.84 trillion from $1.87 trillion a year earlier. The Indian rupee has plummeted from 47.80 in 2012 to 54.30 to a US dollar in 2013, according to Business Standard. Since this report was published in Business Standard newspaper, Indian rupee has declined further against the US dollar to Rs. 59.52 today. At this exchange rate, India's GDP is down to $1.68 trillion, about $200 billion less than it was in  Fiscal 2011-12.


Meanwhile,  Pakistan's economy continues to struggle with its annual GDP rising just 3.6% to $252 billion ($242 billion at Rs. 100 to a USD exchange rate)  in fiscal 2012-13, according to Economic Survey of Pakistan 2012-13 estimates based on 9 months data. The country is facing militancy and energy shortages impacting its economy.