October 13, 2011
Goldman Sachs is often used as the poster child for some of the most egregious practices on Wall Street that are believed to have set off the current economic crisis now sweeping much of America and Europe. This sentiment was summarized in an article Matt Taibi wrote for Rolling Stone Magazine as follows: "The world's most powerful investment bank is a great vampire squid wrapped around the face of humanity, relentlessly jamming its blood funnel into anything that smells like money." 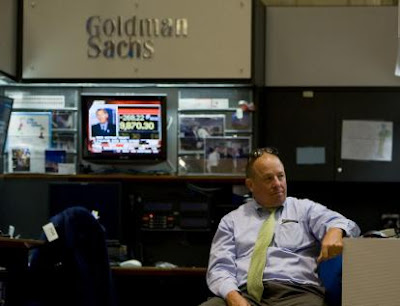 Taibi's criticism of Goldman Sachs immediately drew charges of antisemitism from some American Jewish leaders. And as the "Occupy Wall Street" movement gathers momentum, similar charges are now flying against the protesters who are joining this movement. Some of the Jewish media outlets, like Yeshiva World News, are using video footage of individual protesters to editorialize the claim that “many Jews” are feeling a bit uncomfortable with the growing protests.

“The reasons for these ‘uncomfortable feelings’ don’t need to be elaborated on this page,” the editorial reads. “Suffice to say that Jews have been blamed for the world’s troubles for thousands of years, and many are nervous that this finger-pointing will soon start — or , maybe it already has.”

I, for one, do not believe that the protests are motivated by antisemitism, and such charges are a great disservice to ordinary middle class Americans who have been forced to take to the streets.

From what I can tell, "Occupy Wall Street" appears to be a genuine grass roots movement that stems from a sense of deep dissatisfaction with the way the majority of American politicians of all parties have aided and abetted in the misdeeds committed by the big Wall Street firms. Some of these misdeeds have been laid bare by a number of authors, including Michael Lewis most recently in his two books on the subject. The actions of Goldman Sachs and other big Wall Street firms have led to massive job losses, growing homelessness, and deep concerns among middle class Americans about their own future and the future of this country. A similar situation is now gripping Europe as well.

I think President Obama should seize this opportunity to tap into this anger and use it to push new legislation to bail out the middle class and put an end to the excesses committed by the big business including the Wall Street banks and their highly-paid executives.

Are Jews Culprits of Collapse on Wall Street?

Jewish Power Growing in US Congress

Senator Schumer: The Champion of Wall Street on the Hill

Pay to Play is the Name of the Game in Washington

Are Jews Culprits of Collapse on Wall Street?

Jewish Network in US Congress

Jewish Power Grows in US Congress

Riaz Haq said…
After the Storm: The Instability of Inequality
Nouriel Roubini, Project Syndicate: "This year has witnessed a global wave of social and political turmoil and instability, with masses of people pouring into the real and virtual streets.... While these protests have no unified theme, they express in different ways the serious concerns of the world’s working and middle classes about their prospects in the face of the growing concentration of power among economic, financial, and political elites."
Read the Article

That question is now out in the open, exposed anew by an Op-Ed article in The New York Times on Wednesday by Greg Smith of Goldman Sachs. It could reignite public suspicion that the culture of Wall Street has swung so sharply to the short-term side of the ledger that clients have not been coming in first, or even second, but dead last.

Even bankers who disagreed with Mr. Smith’s conclusions said the piece had struck a chord because it stirred up their own doubts, especially in the wake of the financial crisis. It is a sign of this anxiety that since then, one giant firm after another has publicly proclaimed it is putting clients first.

That much-advertised claim stands in sharp contrast to the world Mr. Smith depicted.

At meetings at Goldman, he wrote, “not one single minute is spent asking questions about how we can help clients,” Mr. Smith wrote. “It’s purely about how we can make the most possible money off of them. If you were an alien from Mars and sat in on one of these meetings, you would believe that a client’s success or progress was not part of the thought process at all.”

He warned, “People who care only about making money will not sustain this firm — or the trust of its clients — for very much longer.”

Riaz Haq said…
Slavery and the Jews
A review of The Secret Relationship Between Blacks and Jews: Volume One

Almost as soon as it appeared, in 1991, The Secret Relationship generated a controversy that centered more on its intentions than its scholarship. The noise level was heightened in 1993 by the turmoil that swirled around Professor Tony Martin, of Wellesley College. A tenured professor in Wellesley's Department of Africana Studies, Martin assigned to one of his classes portions of the book, which singles out Jews for special prominence in the Atlantic slave trade and for having played a particularly prominent role in the enslavement of Africans in the Americas. He was accused of anti-Semitism, and wrote a brief book to refute the charges. The title of Martin's book, The Jewish Onslaught: Despatches From the Wellesley Battlefront, gave a clear preview of his opinions. It was a mixture of discussion, factual refutation, and angry recrimination. This last predominated, with paragraphs that opened using language like "To the Jews, and to their favourite Negroes who have insisted on attacking me I say . . ." His views on The Secret Relationship's use of historical materials amounted to a barrage of enthusiastic endorsements. Ironically, Martin's assertion that "Jews were very much in the mainstream of European society as far as the trade in African human beings was concerned" was very close to what many Jewish scholars had claimed some thirty years before.

Martin, in one of his endorsements, made a startling assertion concerning slave ownership by Jews: "Using the research of Jewish historians, the book suggests that based on the 1830 census, Jews actually had a higher per capita slave ownership than for the white population as a whole." The Secret Relationship does in fact approach making that suggestion, and since the claim would appear to be a pivotal one, it is worth examining.

In order to assess such a claim, one must resort to details. Martin's purported actuality is wrong on its face if applied to the "white population" of the United States "as a whole," because in 1830 only a handful of white northerners still owned slaves. Jews were concentrated in the North, and they constituted a very small minority there. Even if the statement is taken as applying only to the states in the American South that had not adopted gradual emancipation laws, it remains badly flawed. A careful and honest footnote in The Secret Relationship reveals that "Jewish scholars" had concluded that Jews in the South lived mostly in towns and cities. Neither this book nor Martin's explains the significance of this fact. In actuality, slave ownership was much more common in southern urban areas than in the southern countryside. The relatively high proportion of Jewish slaveholding was a function of the concentration of Jews in cities and towns, not of their descent or religion. It is also the case that urban slaveholders of whatever background owned fewer slaves on average than rural slaveholders, including those on large plantations. Thus the proportion of slaveholders has never been an accurate measure of the social or economic importance of slaveholding, unless it is assessed on a broadly regional or state-by-state basis. In this instance, as in so many others, the statistical data do not stand up and cry out their own true significance.
May 5, 2018 at 12:55 PM