April 19, 2017
Bollywood movie revenue suffered 12% drop in 2016 to $338 million, the sharpest decline ever, according to Reuters news agency. Meanwhile, the global movie revenue rose just 1% to a record $38.6 billion last year, according to a report by Motion Pictures Association of America. 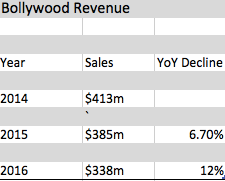 Box office sales hit a record $11.4 billion in the United States and Canada, up 2% from 2015, thanks to blockbusters such as “Rogue One: A Star Wars Story,” “The Secret Life of Pets,” and “Captain America: Civil War”, according to a report in Los Angeles Times.

While Bollywood business is in sharp decline, the Pakistani cinema, though small, is growing very rapidly with the explosive growth of multiplex theater screens. Pakistan's "The News Sunday" estimates that box office receipts in the country jumped 28 per cent in 2015 as compared to 2014 and this figure is only expected to grow in coming years.

"In Pakistan, there is a big market for Indian movies in their multiplexes. For decades this revenue was lost to Bollywood because the movies were pirated. Under former president Pervez Musharraf, the official screening of movies was allowed, benefiting both nations. Today all Bollywood movies are shown there. Unfortunately, the current state of ties between the two countries has been allowed to deteriorate so much that we should not be surprised if Musharraf's wise decision is reversed."

It can be a win-win arrangement with Pakistani artists working with their Indian counterparts in Indian movies and increasing Bollywood revenue from the growing Pakistan market that is already the second largest market for Bollywood entertainment. However, the powerful Hindu Nationalists appear to be succeeding in thwarting this partnership.

If the anti-Pakistan rhetoric and the attacks on Pakistani artists in Mumbai continue, it is very likely that Pakistan will respond by reimposing the ban on showing of Indian films in a rapidly expanding market market for Bollywood entertainment. In addition to increasing estrangement between the two neighbors, stopping cooperation and collaboration will be a significant blow for the entertainment industries in both India and Pakistan.

The sequel to the 2015 epic has collected $131 million worldwide, beating previous record-holder 2014's 'PK'.
Following its record opening weekend when it released worldwide on April 28, Baahubali 2: The Conclusion has become the highest-grossing Indian film of all time.

With the film collecting $13.1 million in the U.S., Baahubali 2 also beat previous record-holder Dangal's $12.4 million total haul in the territory. The real-life wrestling drama also starred Aamir Khan. In India, the film has collected over $106 million, becoming the highest-grossing film in the country, beating previous record-holder Dangal which collected $83 million.

Baahubali 2 is the sequel to the 2015 epic Baahubali: The Beginning and is directed by acclaimed South Indian helmer S. S. Rajamouli. Planned as a two-part epic, both films were simultaneously filmed at an estimated budget of $40 million, making this the most expensive Indian production ever.

In addition to its original Telugu language version, the film was released in Tamil, Malayalam and Hindi. Leading Bollywood banner Dharma Productions distributed the Hindi version of the film and posted a tweet touting the film was “the #1 blockbuster of Indian cinema.”
May 6, 2017 at 8:43 AM

The global success of SS Rajamouli’s fantasy epic sequel Baahubali 2: The Conclusion has once again brought Indian cinema to the attention of the world. Its forerunner, the $31m-budgeted Baahubali: The Beginning (2015), grossed $100m worldwide but caused little more than a ripple outside India. Within the country, it made waves because the film, made in the south Indian Telugu and Tamil languages, saw the Hindi-dubbed version alone gross more than $20m.

The second part of India’s most expensive film ever is a jaw-dropping blockbuster that combines nimble action with genuine heart
Read more
It is a common misconception that the Hindi-language, Mumbai-based film industry – known as Bollywood – is India’s national cinema. The numbers tell a different story. India produces an astonishing 1,900 films a year on average, of which Hindi-language Bollywood accounts for about 340. The bulk of the rest comes from the Tamil, Telugu, Malayalam, Kannada, Marathi, Bengali, Punjabi and Gujarati languages. Domestic box office has remained stagnant at about $1.5bn and, while Bollywood might produce more films (Tamil had 291, Telugu 275, and Kannada 204 films in 2016), it contributes just a third of the box office gross. In short, Bollywood has the visibility, but not the profits, with the under-performers far outweighing the hits.

In this context, the numbers racked up by the “regional” Baahubali 2 – budgeted at $39m, made in Telugu and Tamil, with Hindi and Malayalam dubbed versions – are astonishing by Indian standards. The film opened on 28 April and grossed $194m in 13 days, making it the highest Indian grosser of all time and putting it on track to become the first Indian film to gross $200m. It easily outperformed the $123m collected by PK (2014), starring Bollywood icon Aamir Khan.
May 13, 2017 at 7:58 AM

Riaz Haq said…
70 years of Pakistan’s film industry
A look at the good old days of the Pakistani film industry, which gave us immortal tunes, self made stars, and award-winning directors
https://www.geo.tv/latest/153538-70-years-of-pakistans-film-industry
The film industry in Pakistan is as old as the country itself. It has seen the best of its days, but sadly, the present situation is nowhere near to what it had been.
The good old days had given Immortal tunes, excellent films, self made stars and award-winning directors, but mostly depended on individuals.
The initial decade (1948-1957):
Despite lack of equipment and resources, country’s first film, Teri Yaad, was released in August 1948. Nasir Khan, brother of the famous actor Dilip Kumar, was the hero, with Asha Posley playing his love interest. Pakistan’s first Golden Jubilee film, Sibtain Fazli’s Dupatta, was released in 1952. The film was also appreciated in India at release. It had Noor Jehan as lead, while the music was composed by Feroz Nizami, who had earlier composed for Noor Jehan-Dilip Kumar starrer Jugnu in undivided India five years back. Like Nizami sahab, musicians Ghulam Haider, Rasheed Atre, GA Chishti and Khwaja Khurshid Anwar, opted to Pakistan and played an important role in establishing the industry.
Many stalwarts from India, namely Munshi Dil, Shaukat Hussain Rizvi, Fazli brothers, also migrated, and by the end of the 50s, Pakistan had its set of directors. A young Allauddin, who played the role of Nargis’s father in Mela (1948), remained active for over 30 years, performing memorable roles in his career. The struggling days of the industry would have been different, if there had been no Santosh Kumar or Sabiha Khanum. The ‘first couple’ of the industry eventually tied the knot after giving hits like Do Aansoo (1950), Ghulam (1953) Qatil, Inteqaam (1955), and Sarfarosh (1956). Actor Sudhir was labeled an action hero with hits like Baaghi (1956) and Akhri Nishan (1958), while Syed Kemal, a replica of Indian superstar Raj Kapoor, came on the scene with Thandi Sarak (1957). He could dance as well as made you laugh. Phenomenal Rise of Aslam Pervez, first as a hero and later as a villain, was termed legendary in any phase of life.
The peak years (1958-1967):
It is credited as the golden period of the industry. With limited ban on Indian films, local productions thronged. Field Marshall Ayub Khan’s rule had restrictions on nearly everything, but it was the creative team of director Khalil Qaiser- music composer Rasheed Attre- writer Riaz Shahid who accepted the challenge and gave out exceptional films like Shaheed (1962), Firangi (1964) and Hukumat (1967) until Qaiser’s death in mysterious circumstances.
August 17, 2017 at 11:02 AM

With Abraaj’s investment, the value of which has not been disclosed, Cinepax plans to develop 80 new screens across multiple locations over the next four years and also grow other entertainment related ventures, Abraaj said in a statement.

Arif Baigmohamed and Pir Saad Ahsanuddin established Cinepax in 2006 and launched their first multiplex in 2007. Since then, the company has established itself in the market and today has 29 screens in 12 locations.

Abraaj said it will support the company in establishing international standard multiplex cinemas in new and upcoming areas.

Omar Lodhi, partner for Asia at The Abraaj Group, said: “Our investment into Cinepax demonstrates our faith in the opportunity that Pakistan’s young growing population and expanding middle class represents.

"As one of the most active investors in Pakistan, with a strong on-the-ground presence, we see a long-term market opportunity in the cinema operator and video streaming business.”

Arif Baigmohamed, chairman of Cinepax, added: “We are delighted to welcome Abraaj as an investor into our business and look forward to partnering together to reach more people across the country, providing much needed entertainment options.”

The Abraaj Group has been present in Pakistan since 2004. This transaction marks Abraaj’s ninth investment into Pakistan across a number of sectors including healthcare, power distribution, renewable energy and industrials.
October 4, 2017 at 7:37 AM