February 02, 2018
China's Belt and Road Initiative (BRI) and its flagship China-Pakistan Economic Corridor (CPEC) were the stars at Davos, not US President Donald Trump, according to a New York Times report. The geopolitical momentum lay with Beijing, not Washington, the report said. The forums on BRI and CPEC were among the best attended forums at the World Economic Forum 2018. 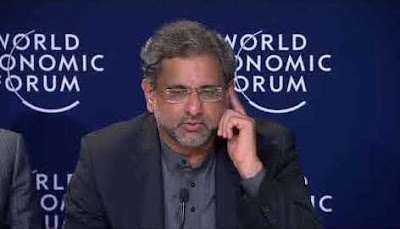 New York Times said "a senior Chinese diplomat helped introduce the prime minister of Pakistan at a breakfast meeting. Prime Minister Shahid Khaqan Abbasi used his talk to praise the rapidly expanding Chinese investments in his country, including to build power stations and a large port".

In another report posted on the World Economic Forum website, BMI Research said Pakistan is among the 10 emerging countries it expects to contribute the most to global growth over the next decade. It said Pakistan is one of the "10 emerging markets of the future" — the countries that are set to become new drivers of economic growth over the next 10 years. BMI estimates that these countries will cumulatively add $4.3 trillion to global GDP by 2025 — roughly the equivalent of Japan's current economy.

Here's an excerpt of the BMI Research report:

"Pakistan will develop as a manufacturing hub over the coming years, with the textile and automotive sectors posting the fastest growth at the beginning of our forecast period. Domestic manufacturing investment will be boosted by the windfall from lower energy prices compared to the last decade, and improved domestic energy supply."

China's Belt and Road Initiative (BRI) and its flagship China-Pakistan Economic Corridor (CPEC) were the stars at Davos, not US President Donald Trump, according to a New York Times report. Pakistan Prime Minister Shahid Khaqan Abbasi's attendance at the World Economic Forum in Davos, Switzerland helped generate positive vibes about Pakistan among the government and business leaders attending the conference. Abbasi's presentation on CPEC drew a lot of attendees making it among the best attended sessions at Davos 2018.

HELD in association with
the Swiss-Asian Cham
ber of Commerce (SACC), the PAKISTAN PAVILION established for the first time in World Economic Forum (WEF)’s 48 year history at its Annual Meeting at Davos 2018 force-multiplied the country’s presence at the high-profile event this year. A private sector initiative by Pakistan’s two leading business houses, PATHFINDER GROUP and MARTIN DOW GROUP, the Pavilion was manned by Pakistani entrepreneurs/professionals specially flown in from Pakistan from financial services, philanthropy, IT, media etc interacted with international investors, experts and officials and even laymen who came to the event. One must commend the tremendous support of Ms Barbara Möckli-Schneider, Secretary General SACC without whose indefatigable enthusiasm the “Pakistan Pavilion” would not have been possible. Barbara was outstanding representing of all that is good about the Swiss. While how to apply rules and regulations is the prerogative of those made responsible for it, one does not have to be stupid about it. That is why people like Barbara are far more important for the relations between two countries rather than any petty official. Thank you, SACC, thank you Barbara!
Pakistan’s private sector was represented at the Pakistan Pavilion by Javed Akhai, CEO Martin Dow Chemicals and myself as Chairman Pathfinder Group. Heads of various companies of the Pathfinder Group were in attendance. As the country’s largest provider of integrated security solutions and facilities management services, the Group is operational in all major cities and towns of Pakistan. Jawed Akhai, Chairman Martin Dow Group was quite optimistic, “This platform is very important to present the narrative of Pakistan. Many speakers have spoken about the Pakistani perspective and this is what is important, that we put across our point of view.”
Among the participants of the Pakistan Pavilion, the not-for-profit Aman Foundation is a Karachi-based Trust which has developed a complete healthcare eco-system, targeting important healthcare matters. It has been working in building long-term societal resilience by enabling equitable access to quality healthcare and education services. Visitors to the Pavilion were briefed about their philanthropist activities. Commenting on Aman’s presence at the World Economic Forum Aman Foundation’s Chairman and Co-Founder Fayeeza Naqvi said, “We are here as representatives of Pakistan’s social entrepreneurs to explore innovative, yet pragmatic, solutions to the complex social and economic challenges facing our world today. We hope that our participation will take us closer to our aspiration of transforming lives and empowering the most vulnerable in our communities.” We were really proud to have Aman Foundation as a philanthropic partner at Davos 2018 because “our visions to enable people to shape their own paths in life are aligned. In this respect, Aman has developed outstanding programs”.
Several other eminent Pakistani personalities were present, among them was Dr. Ishrat Husain, former Governor State Bank of Pakistan (SBP) and Dr Sania Nishtar, President and Founder Heart file the many lucrative opportunities that are offered to global investors despite the challenges being faced by Pakistan. Dr Ishrat was very eloquent about the challenges facing the economy and governance, visitors were impressed with his command of facts and his well thought recommendations about possible solutions. Speakers included Dr Huma Baqai, Sidra Iqbal, Amer Mahmood, etc Ambassador Mustafa Kamal Kazi. It was great to have Sultana Siddiqui and Duraid Qureshi of Hum TV there. Explaining in detail Pakistan’s economy, foreign policy imperatives, gender empowerment, the law and order situation, etc, they were credible and forthright in their presentations.
February 12, 2018 at 9:47 PM


Over the last 17 years, the regular PAKISTAN BREAKFAST has developed into an institution acknowledged by those attending Davos regularly. Hosted by the PATHFINDER GROUP (for the last four years in association with MARTIN DOW GROUP) did not have as its usual CHIEF GUEST the President or PM of Pakistani. Imran Khan, the Chief Guest three years in a row 2011, 2012 and 2013, chose not to come when he became PM in his own right. With Pakistan facing an economic crisis, it was important for Imran to refute wrong perceptions personally.

Moreover, Imran’s star power could have been leveraged in aid of the country. No matter, at a well-attended dinner at the world famous SCHATZALP, Chief Minister (CM) Balochistan Jam Kamal Khan gave a very eloquent and sound analysis of the situation prevailing in Pakistan. An elected CM for Balochistan representing Pakistan on the world stage tremendously negated the wrong perception prevailing about this important Province in Pakistan’s future. The CM had eloquent and knowledgeable support from Senator Anwaar ul Haq Kakar and Lt Gen Asim Bajwa Commander Southern Command.
January 27, 2019 at 7:10 AM

The Davos 2019 theme is Globalization 4.0: Shaping a Global Architecture in the Age of the Fourth Industrial Revolution. It picks up on two major trends. One: this is a fraught time for global cooperation, as legitimate frustration over the failure of globalization to consistently raise living standards spills over into populism and nationalism. And two: a whole new wave of change is crashing on us in the form of the high-tech digital revolution. With climate change posing an existential threat to our common future, we need to figure out better ways to make the global economy work, and fast.

“This fourth wave of globalization needs to be human-centred, inclusive and sustainable. We are entering a period of profound global instability brought on by the technological disruption of the Fourth Industrial Revolution and the realignment of geo-economics and geopolitical forces. We need principals from all stakeholder groups in Davos to summon the imagination and commitment necessary to tackle it.”

Previous industrial revolutions liberated humankind from animal power, made mass production possible and brought digital capabilities to billions of people. This Fourth Industrial Revolution is, however, fundamentally different. It is characterized by a range of new technologies that are fusing the physical, digital and biological worlds, impacting all disciplines, economies and industries, and even challenging ideas about what it means to be human.