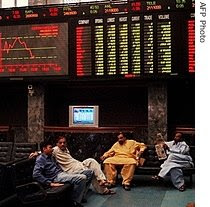 Pakistan's KSE-100 index has gained more than a thousand points in two days bringing it back above 12000 points but still well below the 15739.25 reached on April 21. The latest rally was triggered by several joint measures by the Securities and Exchange Commission of Pakistan and the Karachi Stock Exchange. The measures included a 1-month ban on short selling, a special 30 billion rupee ($446 million) fund set up to stabilize volatility, and revision of the short circuits to 10% on the upside and 1% on the downside.

The new measures could reduce the downside while "creating incentives for the KSE-100 to increase," said Khalid Iqbal Siddiqui, head of research at Invest & Finance Securities, speaking to the Wall Street Journal.

Some 78 companies of the 650 listed on the KSE gained close to the new limit of 10% on Tuesday. Among those that jumped 10% were Oil & Gas Development, National Bank of Pakistan and Lucky Cement.

While there is short-term euphoria in response to the SECP and KSE actions, there is concern that fundamental issues of political stability and confidence in economic growth will likely assert themselves, bringing this rally to an end.

The recent market drop has come as the political situation has become uncertain since February elections. A fractious coalition led by the PPP is in power, and many observers say the country is adrift.
KSE-100 Market Rally Pakistan Unceratainty