June 05, 2008
National Public Radio(NPR, an American radio network, is doing a series on a massive wave of urbanization underway in the world's emerging economies such as Brazil, China, India and Pakistan. It has chosen to start with Karachi, which it describes as Pakistan's "economic lifeline" and financial and industrial "powerhouse" that produces 25% of Pakistan's GDP, and calls it "one of the largest and most crowded cities of the world". It has a segment on Shehri, the activist group fighting big-money developers. 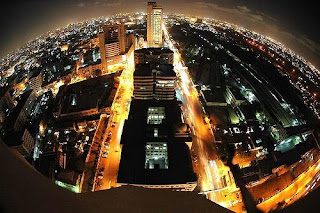 It highlights several other facts about Karachi such as:

1. Karachi is built along a natural harbor facing the Arabian Sea, and this central location between the Middle East and India has made Karachi an important trading port for hundreds of years.

3. The Port of Karachi handles 60 percent of Pakistan's cargo, and the Karachi Stock Exchange is one of Asia's most active trading markets. The city's main industries include shipping, trade, finance, banking, information technology, manufacturing, real estate, media and education.

4. Like any big city, it has its share of problems. Pollution, crime, corruption and political volatility are just some of the issues confronting the 12 million to 18 million "Karachiites" who call this overcrowded city home. Karachi is 60 times larger than it was when Pakistan was created in 1947. And with the population growing at an annual rate of 6 percent, one of the biggest challenges for city officials is managing the tensions and violence that often flare along ethnic and religious lines.

5. Karachi is growing so fast that estimates of its population range from 12 million to 18 million. The country's financial capital is also a city where about half the population lives in illegal houses.

Riaz Haq said…
With a world cost of living index (wcol) of just 46 relative to 100 for New York City, Karachi is the cheapest city among 131 cities in the world, according to a survey reported by Economic Intelligence Unit today.

Here's a WSJ report on it:

Moving to Singapore? Start saving: The city-state is one of most expensive cities in the world – 42% more expensive than New York – topping London, Frankfurt and Hong Kong.

The survey uses prices of goods and services such as food, transportation, housing, utilities, private schools and domestic help to calculate scores for each city, using New York as its base with a score of 100. Zurich and Tokyo scored 170 and 166, respectively, indicating that they are about 70% and 66% more expensive to live in than New York.

Australian cites, too, were well-represented on the list by Sydney (No. 7) and Melbourne (No. 8, though at least it can claim it makes up for the cost in livability). While Japan has long been known as an expensive place to live — Tokyo’s gas prices are 71% higher than New York’s — the emergence of Australia and Singapore on the list is a more recent phenomenon.

Singapore’s rise is notable, since less than a decade ago it was considered a cheap city by Western standards. Just last year, a kilo of bread would have cost US$2.86, according to the Economist’s data, but now costs US$3.19 – an 11% increase from the year before.

The rise of home prices and basic goods in the city-state has for years been a sticking point for many disgruntled Singaporeans, many of whom say government policies to allow more rich expatriates to move to the city has helped push up the cost of living. In recent months, the government has put in place various cooling measures to address high property prices, which are slowly coming down.

Jon Copestake, editor of the survey, cited exchange-rate movement as “the main driver of cost-of-living growth in Singapore, relative to other cities.” The Australian cities rose for the same reason: The Australian dollar rose sharply in value last year, which helped push its two biggest cities up the charts.

Asia is also home to the world’s cheapest places to live, particularly in South Asia. Karachi, Pakistan, came in 131st out of 131 cities, with a score of 46. This makes it three times cheaper than Singapore. Also in the bottom 10: Mumbai; New Delhi; Kathmandu, Nepal; and Dhaka, Bangladesh. India and Pakistan’s cheap labor and land costs are making the area “attractive to those bargain-hungry visitors or investors willing to brave some of the security risks that accompany such low prices,” the survey said.

2. (S) The MQM is an ethnic political party of the Urdu
speaking community (known as \”Mohajirs,\” which is Arabic for
immigrants) that migrated from India at the time of
partition; Mohajirs make up around fifty percent of the total
population in Karachi. MQM is middle-class, avowedly
secular, and anti-extremist (the only party to publicly
protest the recent Swat Nizam-e-Adl regulations). It has a
long history of clashes with the Pakistan People,s Party
(PPP), which controls the Sindh province in which Karachi is
located, and with the Awami National Party (ANP), which
represents MQM,s rival ethnic Pashtuns.

as many as twenty-five thousand armed fighters in reserve.

This is compared to the city\’s thirty-three thousand police
officers. The party operates through its 100 Sector
Commanders, who take their orders directly from the party
leader, Altaf Hussain, who lives in exile in the United
Kingdom. The Sector Commanders plan and monitor the...
---------
ANP (Awami National Party – Peoples National Party)
——————————————— ——

6. (S) The ANP represents the ethnic Pashtuns in Karachi.
The local Pashtuns do possess personal weapons, following the
tribal traditions of the North West Frontier Province (NWFP),
and there are indications they have begun to organize formal
armed groups. With the onset of combat operations in the

7. (S) If rhetoric of the police and the ANP leadership is to
be believed, these armed elements may be preparing to

challenge MQM control of Karachi. In March, the Karachi

Police Special Branch submitted a report to the Inspector
General of Police in which it mentioned the presence of
\”hard-line\” Pashtuns in the Sohrab Goth neighborhood. Sohrab

9. (S) ST is a small religious/political group with a
presence in small pockets of Karachi. The group has only
managed to win a handful of council seats in local elections
but militarily it is disproportionably powerful because of
the influx of MQM-H gunmen after the government crack-down on
MQM-H (see above). ST has organized the party and its gunmen
along the lines of MQM by dividing its areas of influence
into sectors and units, with sector and unit commanders. ST
and MQM have allegedly been killing each other\’s leadership
since the April 2006 Nishtar Park bombing that killed most of
ST\’s leadership. ST blames MQM for the attack. There
appears to have been a reduction in these targeted killings
since 2008.

10. (S) PPP is a political party led by, and centered on the
Bhutto family. The party enjoys significant support in
Karachi, especially among the Sindhi and Baloch populations.
----

11. (S) AP and RD are two traditional criminal gangs that

have been fighting each other since the turn of the century
in the Lyari district of Karachi. Both gangs gave their
political support to PPP in the parliamentary elections. The
gangs got their start with drug trafficking in Lyari and
later included the more serious crimes of kidnapping and
robbery in other parts of Karachi. (Comment: Kidnapping is
such a problem in the city that the Home Secretary once asked
Post for small tracking devices that could be planted under
the skin of upper-class citizens and a satellite to track the
devices if they were kidnapped. End comment.)
---------....