Is Demand in South Asia Driving Up Gold?

January 15, 2008
Human civilization's fascination with gold goes as far back as the Sumerians of Mesopotamia (Modern day Iran and Iraq) where gold was first discovered in the third millennium B.C. While the reasons for accumulating gold have been changing over time, the fascination continues unabated. The gold price is surging again. This week it set a new record of about $890 per troy ounce, well ahead of the previous all-time record of $850 an ounce set in 1980. A troy ounce is about 31.1 grams and a tola is 11.7 grams. Some analysts argue that, even at the nominal price of $890 an ounce today, it remains far below the inflation-adjusted high of about $2200 an ounce, based on the current equivalent of the 1980 dollars. 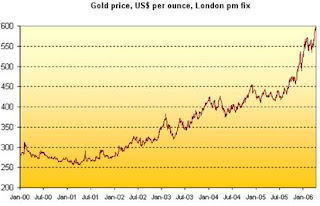 There are many factors driving the price of gold in recent times. Among others, the slowing sale of gold reserves by the European central banks and the declining production and falling dollar have been the most cited reasons. However, the one factor that I believe is the most significant is the newfound wealth and the surge in gold demand in South Asia, the Middle East and China. According to the World Gold Council figures, the annual demand in India alone is about 800 tonnes, almost all of it for jewelry. The Indians are estimated to own about 40,000 tonnes of gold, about a third of the world's total. Exact figures for Pakistan are hard to find but demand in Pakistan is estimated at 150-160 tonnes per year. The Chinese are using 220 tonnes a year. A tonne is 32,150 ounces. Most forecasts indicate continuing growth in gold demand as Asian growth continues for the foreseeable future.

In addition to the growth in traditional jewelry demand in South Asia and the Middle East, the US dollar erosion and the inflation and recession fears are fueling investor interest in gold and new ways of investing in gold are thriving. Two ETFs called streetTRACKs Gold Trust (NYSE: GLD) and Metal Gold ETF (LON: PHAU) have been very popular vehicles for retail investors. An ETF is an Exchange Traded Fund. It is similar to a Mutual Fund except that it can be traded like regular shares at any time when the markets are open.
GLD currently holds 628 tonnes of gold, just behind Japan central bank.

Many analysts are quite bullish about continuing surge in gold prices. If, however, Central Banks decide to start selling significant amounts of gold again, gold price could drop. US Federal Reserve alone holds about 8,500 tonnes of gold followed by Germany with 3,400 tonnes. The last crash of the gold price in 1990s was caused by large gold sales by the Bank of England and other European central banks.
Demand ETF Gold Price South Asia

KARACHI: The global demand of gold is more than 2500 tonnes and Pakistan's consumption is more than 100 tonnes which makes Pakistan world's 10th largest market.

Gold is usually imported from Gulf States and Western countries.

In gems sector, Pakistan is full of natural resources. Unmatched quality of ruby, emerald, topaz, aqua marine, fluorite and lais-Iazuli are mined from the valleys of Gilgit, Hunza, Swat, Azad Kashmir and Chitral.

This was stated by President, Federation of Pakistan Chambers of Commerce and Industry (FPCCI) Zubair Ahmed Malik while inaugurating three-day International Gems and Jewellery Exhibition at a hotel here on Friday.

This international exhibition has been jointly organised by Jewel Time magazine and All Pakistan Gems and Jewellery Merchants Association (APGJMA) in collaboration with Trade Development Authority of Pakistan (TDAP).

Vice Chairman of APGJMA Kashif-ur-Rehman said that more than 50 companies have participated in the exhibition. The products of stone, diamond, gold and silver jewellery are show-cased. A large number of people visited the venue.

FPCCI President said that due to unavailability of gem cutting and polishing facilities, gems are exported in a raw form which brings nothing as compared to its real worth.

Pakistan has been gifted with abundant resources of several precious and semi-precious gemstones. At present, most of these are found in Gilgit-Baltistan and Khyber- Pakhtunkhwa, and Balochistan has a huge potential which remains to be explored.

Most important of the currently found stones are emeralds of Mingora (Swat), pink and golden topaz of Katlang (Mardan) and aquamarine of Chitral and Neelam valleys, he said.

There is no formal survey available to identify the geological resources of gemstones in the country. Due to lack of realisation of its importance as an industry, those who are engaged in the mining, cutting/ polishing and trading of gemstones in Pakistan have not been able to exploit the full potential of this sector.

Malik said Lahore has become the second largest jewellery production hub of Pakistan after Karachi. More than 25,000 business enterprises related to gems and jewellery are operating in Punjab and providing employment to more than 20,0000 individuals.

It is estimated that $1.5 billion jewellery target set up for 2017 by Pakistan is achievable provided the entrepreneurs are encouraged, a supportive infrastructure is developed, latest mining and cutting, gems and jewellery manufacturing techniques are introduced at the grassroots level.

Exports of gems and jewellery in the country has witnessed a sharp increase of 16.99 percent and 138.73 percent respectively during first eight months of current financial year against the same period of last year.

The jewellery exports during the period under review were recorded at $1.21 billion while during last year, the exports stood at $506.3 million.

MUMBAI: The country's gold demand dipped by 12 per cent in 2012 to 864.2 tonne, mainly on account of higher import duties, jewellers strike over proposed measures to curb imports and a sharp rise in the domestic price, World Gold Council said in its recent report.

The overall demand of gold in the country had stood at 986.3 tonne in 2011, according to the WGC Gold Demand Trend 2012 report released today.

In 2013, WGC expects the demand to be in the 865-965 tonne range, an 11 per cent increase at the upper end, depending on any further government measures, he said.

India is likely to remain the biggest market for gold this year followed by China, he said.

In the first half of 2012, consumers faced headwinds in the form of higher import duties, market turmoil over proposed measures to curb imports and a sharp rise in the local price.

However, the demand staged a strong revival in the second half of the year as the market thrived during the fourth quarter wedding season and festive period.

"Despite the turbulent macroeconomic climate throughout the year, as well as the regional uncertainties affecting India and China, the two largest gold markets, annual demand was 30 per cent higher than the average for the past decade," Grubb added.