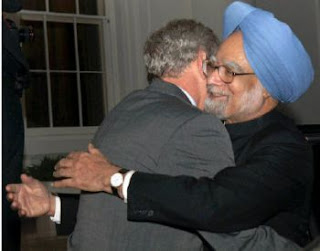 "The people of India deeply love you", said Indian Prime Minister Manmohan Singh to President Bush on a recent visit to the White House.

The Prime Minister continued with the theme of affection and gratitude by adding, “In the last four and half years that I have been Prime Minister, I have been the recipient of your generosity, your affection, your friendship. It means a lot to me and to the people of India.”

Later, India's Foreign Secretary Shiv Shankar Menon explained: “I think, if you look at the public opinion polls, the ratings for President Bush are higher in India than in any other country. That is the factual basis.” 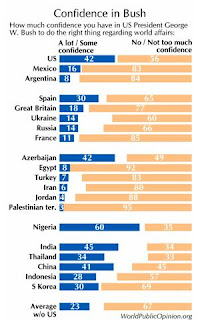 The Program on International Policy Attitudes (PIPA) poll that Mr. Menon referred to shows that India tops the world in its admiration for President Bush who is deeply unpopular in the United States and most of the rest of the world. The survey found that 62% of Indians thought his second term as US president was positive for global security.

Another most recent PIPA poll conducted in 2008 shows that the one country with a majority expressing a positive view of Bush is Nigeria with 60 percent saying they have some or a lot of confidence. Indians also lean positive (45 to 34%). Interestingly, this year Chinese views have softened (41% positive, 45% negative)--with the number of those expressing positive views up 10 points since Pew's 2007 poll.

India has benefited from the Bush policies of closer economic and nuclear cooperation which led to India's rapid economic growth in recent years, and its acceptance as a legitimate member of the prestigious nuclear club, a distinction not bestowed on nuclear rival Pakistan. The US-led war on terror has also legitimized India's crackdown on Islamic and other insurgents and helped India regain influence in Afghanistan and South Asia. Bush's pressure on Musharraf was instrumental in reducing violence in Indian held Kashmir and India, a Musharraf policy that angered the Islamists who started targeting Pakistani civilians and military. Bush popularity is, therefore, based on concrete results India achieved from the support of the outgoing US president.

A grateful Prime Minister acknowledged Mr. Bush’s part in ending India’s nuclear isolation: “For 34 years, India has suffered from a nuclear apartheid. We have not been able to trade in nuclear material, nuclear reactions, and nuclear raw materials. And when this restrictive regime ends, I think a great deal of credit will go to President Bush. And, for this I am very grateful to you, Mr. President.”

President Bush's lame duck status was clearly on Dr. Singh's mind. Turning to Mr. Bush, Dr. Singh said with apparent sincerity: “So, Mr. President, this may be my last visit to you during your presidency, and let me say ‘Thank you very much’. The people of India deeply love you.”

The Americans clearly see India as a strategic partner and a counterweight to China's growing influence in Asia, Middle East and Africa. While the US has made the effort to cultivate close friendship with Indians, it is not clear how this partnership will unfold in terms of specific Indian policies to help the US.

Isolating Iran is one its goals where the US wants India's help. Energy-hungry India needs Iran-Pakistan-India gas pipeline project to move forward. The US is clearly opposed to it. How will India respond to the US pressure? Alastair Scrutton, Reuters Chief Correspondent in Delhi, has addressed this in an analysis of the nuclear deal, saying those hoping that India will now fall into line with western policy will be disappointed.

Scrutton quotes Brahma Chellaney as saying that India will be reluctant to get sucked into U.S. efforts to isolate Iran.

“Now the (nuclear) deal has been sealed, India will have to mend ties with Iran,” Chellaney said. “For India’s strategy, to give up Iran would be a very difficult proposition … There is no way India can pursue an effective Afghan, Central Asian policy without Iran.”

I have a feeling that the I-P-I gas pipeline will be built with or without the US blessing. The reason is simple: Both India and Pakistan are energy-hungry and Iran is the closet source of abundant natural gas for South Asia. It is in their own best national interest to defy the U.S. on this particular issue. The only thing that is likely to delay it significantly is the deep distrust between India and Pakistan where U.S. can and must play a role regardless of the I-P-I project. It is in U.S.’s best interest to do so for its own economic and strategic interests in South Asia.
Bush India Iran Manmohan Singh Pakistan US-India Nuclear Deal