Pakistan Building Humvees for US Troops? 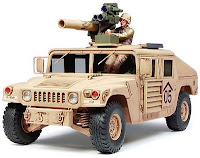 A report in Asia Times On Line claims that Pakistan has received secret orders from the US to build 1000 Humvees at HIT (Heavy Industries Taxila). These vehicles are needed urgently for the expected US troop surge in Afghanistan and possibly for more action in Pakistan's FATA region. The apparent reason for secrecy is the political sensitivity amidst strong anti-American sentiments prevailing in Pakistan after recent US military incursions and predator attacks in FATA.

ATOL's Syed Saleem Shahzad claims that the "work on the Humvees has already begun, although the task is being undertaken in secret".

Heavy Industries Taxila (HIT) is the backbone of Pakistan's Engineering Industry for the Pakistan Armed Forces, being a combination of multiple industries that has grown into a large military complex in the last decade. It has six major production units. Heavy Industries Taxila is one of the largest defense production facilities in Pakistan with a manpower of over 6500 highly skilled personnel and engineers trained in the field of defense production. Out of the 6500 employees, about 30% are uniformed personnel.

The Organization provides facilities for the overhaul, rebuilding and manufacturing of Main Battle Tanks, Armored Recovery Vehicles and Armored Personnel Carriers and has recently developed and produces MBT-2000 Al-Khalid Tank. In addition it rebuilds, upgrades and modernizes Armored Vehicles of various origins.

Humvees for the US troops are currently produced by AM General, an American heavy vehicle manufacturer based in South Bend, Indiana. While HIT has been exporting heavy armaments to many countries, the reported Humvee order represents the first major HIT deal for the U.S.

Earlier in July of this year, Major General Mohammad Farooq, Director General of the Defense Export Promotion Organization, had indicated that collaboration with the United States had increased in manufacturing armored personnel carriers "with transfer of technology".

According to a July report in Pakistan's Dawn newspaper, General Farooq claimed that Pakistan’s defense exports have tripled to around $300 million because of the quality of its ammunition, anti-tank guided missiles, rocket launchers and shoulder-fired surface-to-air missiles. He said exports to South Asian, Middle Eastern and African countries had increased significantly.

“The fuses are being purchased by countries like Italy, France and Spain,” he said.

In reply to a question, he told Dawn, Pakistan’s military exports were higher than India’s. “Indians started working on Arjun tank but, they are yet to induct it in their army, while Pakistan has built and handed over Al Khalid tank to the army, although it started the program later,” he said.

Lately, Pakistan has come under severe criticism by human rights groups for being a leading manufacturer and exporter of land-mines, cluster bombs and depleted uranium munitions.

While the reported US order for a thousand Humvees is an opportunity for Pakistan to earn badly needed foreign exchange, it could become a serious political headache for Zardari administration. The deal could also raise hackles of those in the United States who oppose any vehicle-related outsourcing when the US auto industry is in deep trouble.
Arms Exports Humvee Pakistan Secret US

Imran Adil said…
In Pakistan companies in this business are generally using certified materials but except some of them there retrofitted armored vehicles does'nt have any certification from independent testing agencies after armoring. Very few people know this fact that in an armored vehicle the importance of armoring is as much as materials used. If we use the world's best armoring materials but compromise on the process of armoring or fitting those materials, our security will be compormised.
U can find more about armored vehicles on this site http://www.n-mav.com
July 22, 2013 at 5:03 PM