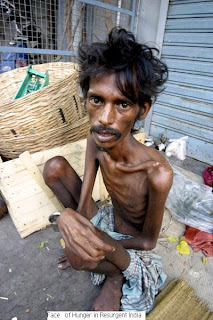 India, often described as peaceful, stable and prosperous in the Western media, remains home to the largest number of poor and hungry people in the world. About one-third of the world's poor people live in India. More than 450 million Indians exist on less than $1.25 a day, according to the World Bank. It also has a higher proportion of its population living on less than $2 per day than even sub-Saharan Africa. India has about 42% of the population living below the new international poverty line of $1.25 per day. The number of Indian poor also constitute 33% of the global poor, which is pegged at 1.4 billion people, according to a Times of India news report. More than 6 million of those desperately poor Indians live in Mumbai alone, representing about half the residents of the nation's financial capital. They live in super-sized slums and improvised housing juxtaposed with the shining new skyscrapers that symbolize India's resurgence. According to the World Bank and the UN Development Program (UNDP), 22% of Pakistan's population is classified as poor.

There is widespread hunger and malnutrition in all parts of India. India ranks 66th on the 2008 Global Hunger Index of 88 countries while Pakistan is slightly better at 61 and Bangladesh slightly worse at 70. The first India State Hunger Index (Ishi) report in 2008 found that Madhya Pradesh had the most severe level of hunger in India, comparable to Chad and Ethiopia. Four states — Punjab, Kerala, Haryana and Assam — fell in the 'serious' category. "Affluent" Gujarat, 13th on the Indian list is below Haiti, ranked 69. The authors said India's poor performance was primarily due to its relatively high levels of child malnutrition and under-nourishment resulting from calorie deficient diets.

Indian media's headlines about the newly-minted Indian billionaires need to bring sharper focus on the growing rich-poor gap in India. On its inside pages, The Times of India last year reported Communist Party leader Sitaram Yechury's as saying that "on the one hand, 36 Indian billionaires constituted 25% of India’s GDP while on the other, 70% of Indians had to do with Rs 20 a day". "A farmer commits suicide every 30 minutes. The gap between the two Indias is widening," he said.

Today's San Jose Mercury News has a pictorial about grinding poverty in India done by John Boudreau and Dai Sugano. This heartbreaking pictorial illustrates the extent of the problem that India faces, a problem that could potentially be very destabilizing and put the entire society at the risk of widespread chaos and violence.

Here's a video clip from the Mercury News story:

Please make your contribution to the Hunger Project or Hidaya Foundation or Edhi Foundation to help alleviate hunger and poverty in South Asia.

A Broken People in Booming India

Riaz Haq said…
Here are some excerpts from a piece by Lan Pritchett of Harvard University on India's poor performance on PISA:

As the current superpowers are behind the East Asian economic superstars in learning performance the distance to India is not quite as far, but still the average TN/HP child is right at the level of the worst OECD or American students (only 1.5 or 7.5 points ahead). Indians often deride America's schools but the average child placed in an American school would be among the weakest students. Indians might have believed, with President Obama, that American schools were under threat from India but the best TN/HP students are 24 points behind the average American 15 year old.

Even among other "developing" nations that make up the BRICs India lags - from Russia by almost as much as the USA and only for Brazil, which like the rest of Latin America is infamous for lagging education performance does India even come close - and then not even that close.

To put these results in perspective, in the USA there has been huge and continuous concern that has caused seismic shifts in the discourse about education driven, in part, by the fact that the USA is lagging the economic superstars like Korea. But the average US 15 year old is 59 points behind Koreans. TN/HP students are 41.5 points behind Brazil, and twice as far behind Russia (123.5 points) as the US is Korea, and almost four times further behind Singapore (217.5 vs 59) that the US is behind Korea. Yet so far this disastrous performance has yet to occasion a ripple in the education establishment.
------------
These PISA 2009+ results are the end of the beginning. The debate is over. No one can still deny there is a deep crisis in the ability of the existing education system to produce child learning. India's education system is undermining India's legitimate aspirations to be at the global forefront as a prosperous economy, as a global great power, as an emulated polity, and as a fair and just society. As the beginning ends, the question now is: what is to be done?