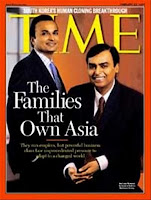 Investors of Indian Companies controlled by families are growing suspicious in the wake of the Satyam scandal involving the Raju brothers. Older brother Ramalinga Raju served as chairman and younger brother Ram Raju was managing director of Satyam.
B. Ramalinga Raju admitted he had a fictitious cash balance of more than $1 billion on Satyam balance sheet and said in a letter of resignation that he overstated profits for the past several years, overstated the amount of debt owed to the company and understated liabilities. Eventually, he said, the scheme reached "simply unmanageable proportions" and he was left in a position that was "like riding a tiger, not knowing how to get off without being eaten."

In the aftermath of the Satyam scandal described as "India's Enron", shares of the energy giant, Reliance Industries, controlled by one Ambani brother, are down 19%. The smaller listed Reliance units have likewise been punished in the market. Reliance Communications has tumbled nearly 28%. By contrast, Maruti Suzuki and Hindustan Unilever -- thanks to the foreign scrutiny their names imply -- are up 3.3% and 6.5%, respectively, from their close on Jan. 6. The 30-stock Bombay Stock Exchange Sensitive Index, by comparison, is down 12%, according to the Wall Street Journal.

Indian governments handling of the crisis of confidence in publicly traded companies will hold the key to the nation remaining a preferred destination for investors. Their swift move to fire and replace Satyam's board of directors -- and the announcement by SEBI, the Securities and Exchange Board of India, that it will start reviewing auditors' work -- are steps aimed at restoring investor confidence.

One measure of how investors respond could come on Tuesday when Infosys Technologies -- considered a model of good governance in India -- announces its fiscal third-quarter earnings.

Whether shareholders' attention reverts to pure numbers or stays on the scrutiny of the quality of earnings will reveal much about how lasting this post-Satyam focus on governance will be.
India Investor Confidence Satyam Scandal SEBI